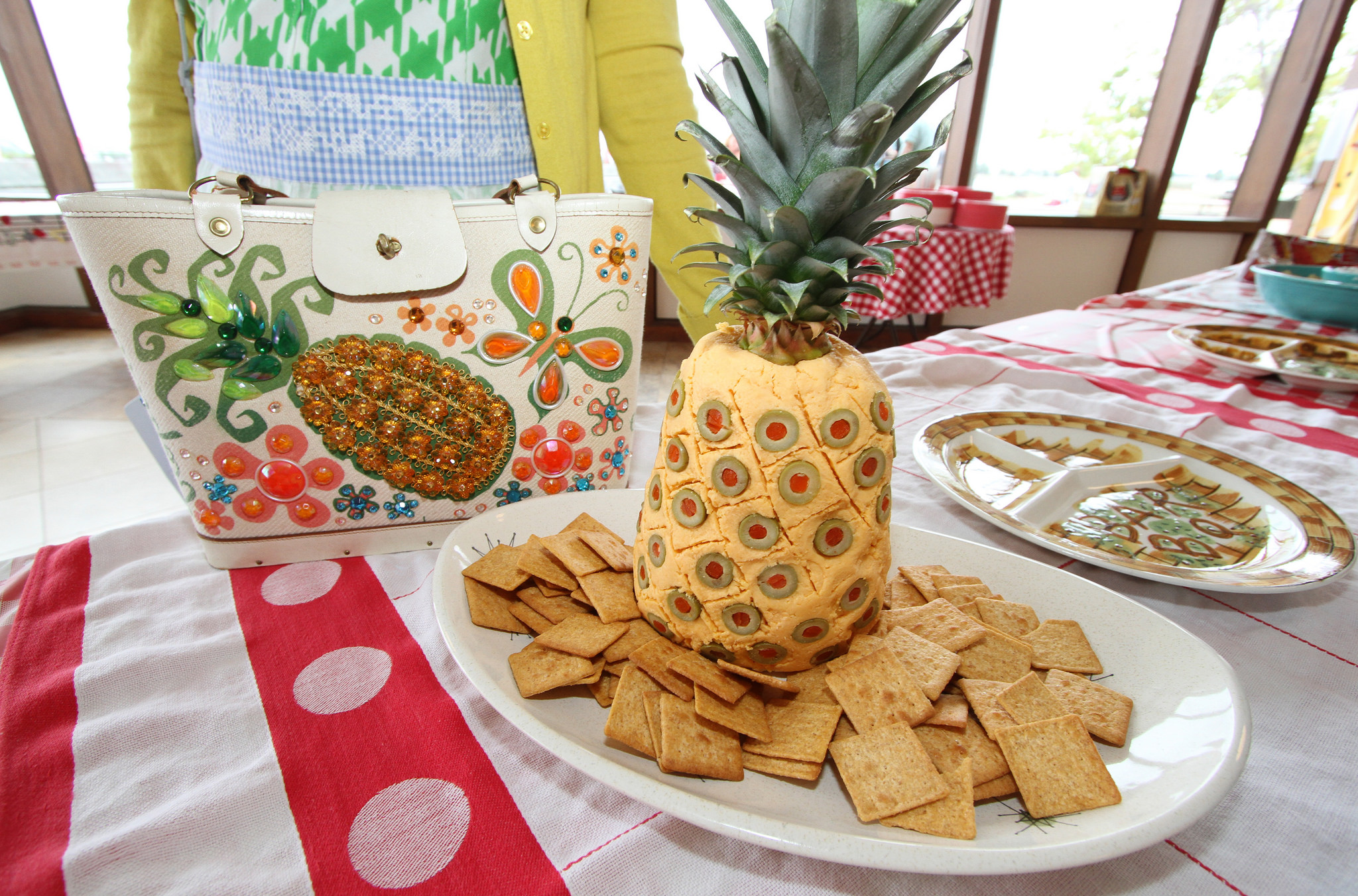 When I was a kid, my grandmother's holiday go-to dish was a mayo-topped carrot and pineapple Jell-O salad (I still despise mayonnaise to this day).

In the 70s, I remember flipping through my mom's cookbooks and recipe cards looking at all the questionable creations inside. Looking back I can see that the recipes were targeted to ambitious homemakers with plenty of time on their hands. Ungodly (in)edibles like aspic-glazed lamb loafs (below), cocktail weenie trees, and ambrosia salad immediately come to mind.

My pals Karen Finlay and Jennye Garibaldi were also fascinated by the elaborate dishes within these cookbooks. So much so that in 2007, after meeting like-minded folks in a Mid-Century Supper Club Flickr group, the duo started hosting themed potluck parties where invitees were asked to whip up vintage recipes to share with other the guests.

The Mid-Century Supper Club (MCSC) potluck was born and it soon became a big success.

In 2008, the first potluck was held in Karen's Oakland, California flat. By the end of 2012, the annual party had gotten so big that it had to be moved to a rental venue. For the past few years, it's found a home at the (amazing, old school) Eagles Hall in downtown Alameda, California.

A good deal of the MCSC's charm is that it's more than just about re-creating a vintage dish. It's about going all in. To be sure, presentation is key, as laid out in the official rules:

If you've ever looked through vintage cook books and booklets, you know that in the mid-century era, creative and stylish presentation was almost as important as the taste of the food…judging by some of the ingredients, maybe more so! That's why we're not worried in the least about any substitutions you may want to make…meat substitutes for the vegetarians, replacements due to allergies, heck, even shortcuts like cake mix are fine! The point is to make the dish look more-or-less like the original image, or in the mid-century spirit!

That said, dishes will be judged on accuracy of presentation, and a winner will be determined by our esteemed panel of gourmand judges. Bonus points for vintage cookware/serving dishes!

It's also about getting dolled up in retro style.

While it is all in good fun, there are cool prizes to be won which makes the whole affair a tad competitive.

I attended my first one in 2011, a Christmas potluck, and was thrilled to win "Best Dessert" for my Fluffernutter Fudge Tree. I felt lucky to win, as my Fluff-and-peanut-butter dessert was pitted against some seriously clever sweets.

Believe me when I say this, folks pull out all the stops at these soirees. Just look at some of these past creations…

On Saturday, October 21, for the first-ever Halloween-themed MCSC potluck, Karen and Jennye will once again play the "hostesses with the mostesses." The fun begins at 5 PM at the Fraternal Order of Eagles in downtown Alameda, California and tickets are still available (Kids $6+/Adults $16+). Cartoonist and (New York Times bestselling) author Mimi Pond is set to guest judge the event.

If you go, and you should, be sure to dress to impress!