Vote for the best Halloween candies, for science 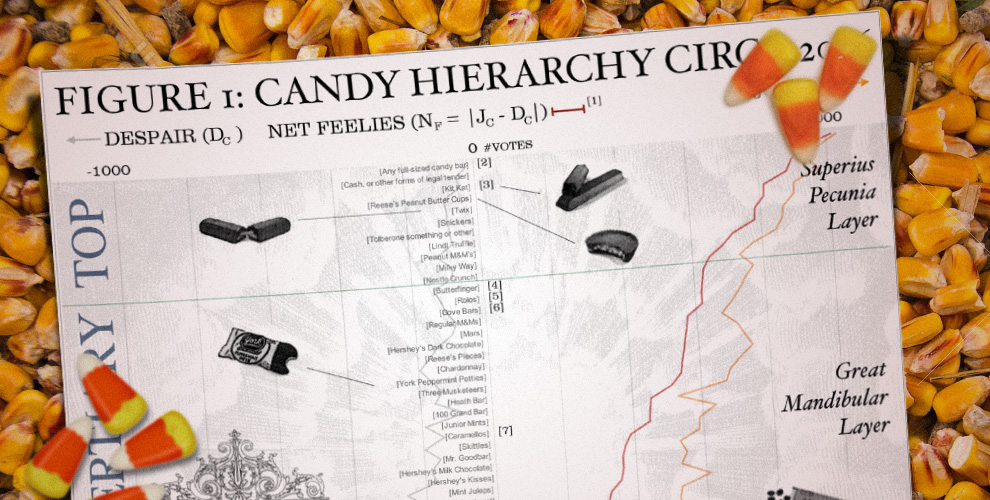 Remember last year? Remember the above figure (direct link), where all was laid out? This is how SCIENCE ranks your Halloween haul. Kit Kat and actual cash at the top, dental floss and anything whole wheat near the bottom.

Well, now it's time for the 2017 Candy Ranking Games. Go and fill out this 10 minute survey into the best and worst Halloween candies. Do it for science. Do it to fight #fakenews. Go forth, go go!

Note that data will be collected for analysis until noon, PST, Oct 25th.  This year’s Candy Hierarchy will be published on October 27th.

You probably thought all we’d talk about this year is David S. Pumpkins and candy corn. Ask David S. Pumpkins to guest co-author, they said. He’s got a Wikipedia page and you don’t, they said. Just because that’s a year-old and only half-interesting reference, still, it’ll never get old and it’ll never die, they said, and by then they’ll forget you said something about candy corn in the first sentence. Because what the hell is going on with candy corn debates this year? How did 2017, of all years, become the one where candy corn blew up? It’s not a bell curve, it’s bi-modal, you know. People love it or hate it and never the twain shall meet. No twain meeting. You do know that don’t you? This comes up every year, obviously, given its importance, but wow, it’s all over the place this time. And then some dude told us they’re making Hershey bars with candy corn in them? What the dip-shit is that?

We don’t care, that’s what the dip-shit it is. We leave it up to you. That’s where we were headed with this. It’s up to you. Because David Ng and B.R. Cohen (that’s us) are again re-presenting the official universal survey about your candy favorites for The 2017 Candy Hierarchy.

If you want to spend your BoingBoing time reading about our vaunted methodology and sharp insights about survey logistics, if you feel like you need more debriefing on our statistical acumen and scientific ambitions, if you like talking about longitudinal studies and you’re not thinking of maps, go on ahead, read the back catalog. You’ll find that in just the past two years, we’ve tabulated 6000+ individual responses with over 600,000 preferences. But maybe you don’t care for numbers. Maybe you care only for the enormous skill the industry has for congealing sugar into bar, disc, dot, glob, cluster, dud, chip, wafer, cup, jack, cap, egg, or Donald Petersen. If you’re just here to define a candy hierarchy, that is, then have it. We give you the Fourth Annual Candy Hierarchy Survey. Go forth. Rank. We’ll be back next week to present this year’s hierarchy in full.