Jeremy Corbyn to European left-wing parties: you won't win until you abandon neoliberalism 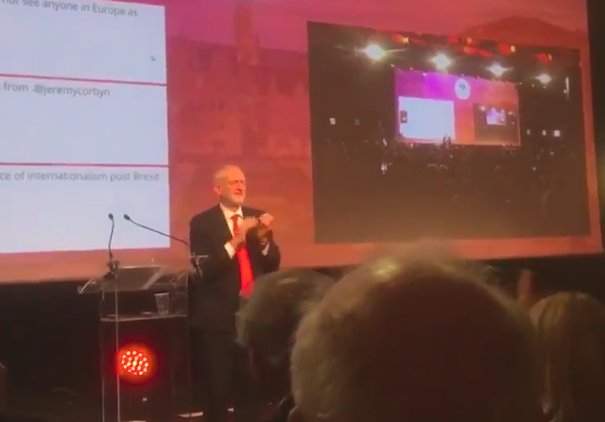 The Europe Together conference in Brussels brought together party leadership from "centre-left" parties across Europe; Jeremy Corbyn got two standing ovations for a barn-burning speech in which he called on European left wing parties to abandon Blairite anti-union/pro-bank policies and embrace policies that helped working families and reduced inequality.

Corbyn railed against low taxes for the rich, deregulation and privatisation of public industries and decried a false centrism that he blamed for the rise of reactionary, xenophobic far-right movements across Europe.

Corbyn's warm reception started during his introduction, where he was described as "the new Prime Minister of Britain."

“We all know their politics of hate, blame and division and not the answer, but unless we offer a clear and radical alternative of credible solutions for the problem we face, unless we offer a chance to change the broken system, and hope for a more prosperous future, we are clearing the path for the extreme right to make even more far-reaching inroads into our communities. Their message of fear and division would become the political mainstream of our discourse.

“But we can offer a radical alternative; we have the ideas to make progressive politics the dominant force of this century. But if we don’t get our message right, don’t stand up for our core beliefs, and if we don’t stand for change we will founder and stagnate.”

He continued: “The neoliberal economic model is broken. It doesn’t work for most people. Inequality and low taxes for the richest are hurting our people and harming the economy as even the IMF now acknowledges.

“It is, my friends, possible to win those arguments if you engage with them and put them out there. We will continue to do that. If our message is bold, and our message is radical, if we listen to what the majority actually want, we will prove the elites and their pundits wrong.”