If you -- like me -- are a loyal listener to the Judge John Hodgman podcast, then you have a sense of what makes Hodgman a treasure: it's his combination of understated, low-key wit; his quick self-deprecation; and his deep compassion, which is what makes his comedic "fake internet courtoom" into more than a quick gag, turning it into reliable source of thought-provoking insight into how to be a better person. If that's your thing, then you will love his latest book, a memoir called Vacationland: True Stories from Painful Beaches, which isn't just funny... it's also sneaky as hell.

I was raised on collections of dry, weird comedic essays like Steve Martin's Cruel Shoes and Groucho Marx's Memoirs Of A Mangy Lover, books that became touchstones for me and my little crowd of weird, smart, not-very-social dudes, and we memorized them and photocopied them and stuck them on our doors and so on.


My first impression of Vacationland was that I'd found a modern version of these much-loved books. Hodgman is so very witty, and as he sets up his memoir — the story of how he was a weird kid raised by loving but largely unconcerned parents — he has so many tinder-dry asides and beautifully turned sentences and jokes with long fuses that unexpectedly detonate paragraphs later that I was really getting ready to relive my own childhood. 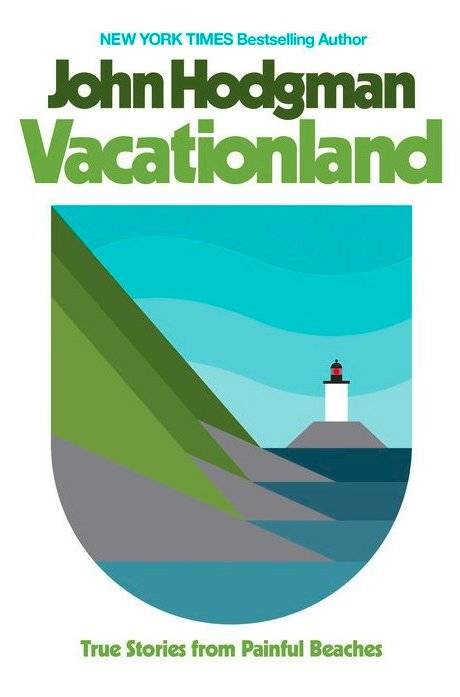 But this is a sneaky book.

There's a useful literary criticism term, "bathos," that the Turkey City Lexicon defines as a "Sudden change in level of diction. 'The massive hound barked in stentorian voice then made wee-wee on the carpet.'" Bathos is that whipsaw you get when something funny turns serious, or vice-versa, and the mismatch in moods keeps anything useful from gelling out of the exercise.

But all literary rules are made to be broken. "Bathos" is what we call mood-switches when they fail. When they work, we call them genius (see, e.g. Neal Brennan's justly celebrated "3 Mics").


Right as I was getting comfortably settled into Vacationland, I discovered that Hodgman had smoothly transitioned me into some really profound emotional truth — it's where he starts talking about his mother's untimely death and how he reacted to her terminal illness — and then back into that dry, comedic mode, slipping the knife in and pulling it out so smoothly that I hadn't even noticed until the blood started to drip. That kind of maneuver requires both a steady hand a very sharp knife, and Hodgman has both.


This sneaky book pulls that move over and over, using comedy and narrative confidence to make important points about privilege, self-delusion, parenting, death, birth, cities, alienation, love — the whole gamut.


All without ever losing the comedy, which is funny stuff, and it's not a spoonful of sugar that helps all that serious medicine go down, it's perfectly blended into those serious themes.

This isn't a book like Cruel Shoes: it's the book Cruel Shoes gets to be when it grows up.