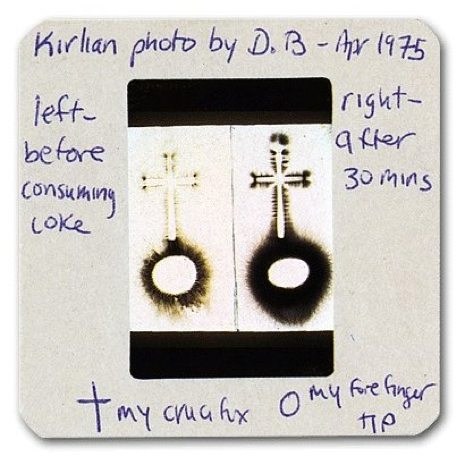 In 1975, Thelma Ross of UCLA's parapsychology lab gifted David Bowie a Kirlian photography machine to capture images of peoples' "auras." This machine generates a high-voltage field to a photographic plate resulting in a glowing corona discharge image of whatever is positioned on the plate. The color, shape, and intensity of the image is affected by myriad factors, from humidity to how well the object is grounded to, or, in the case of people, the amount of oil and sweat on the skin. But of course Bowie was into the occult and other high weirdness so the possibility of photographing one's "aura" appealed to him. From the Daily Grail:

Bowie's interest in Kirlian photography was evident: some of the photos that resulted from his experimentation with the technique were published in the programme for his 1976 tour in support of Station to Station. And he used it to try and understand what was happening to his body when he took drugs: he compared two Kirlian photographs of his fingertip (beside a crucifix given to him by his father), one image taken before consuming cocaine, the other after.

Bowie liked the image so much that he used it in the booklet of Earthling (1997) and as the cover art for the "Little Wonder" single.