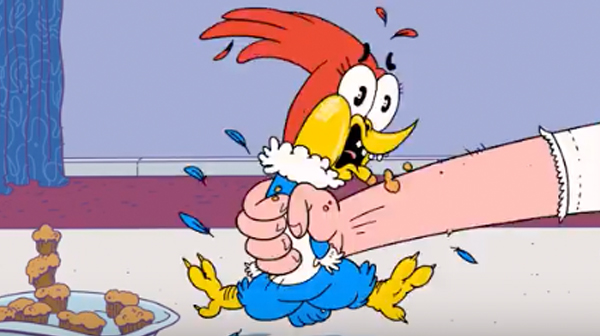 70 or so South American animators were assembled by Brazilian animator Ivanildo Soares to recreate a 1961 Woody Woodpecker short, "The Bird Who Came to Dinner."

It's a late-era Woody cartoon, and it's pretty uninspiring. But somehow it inspired these animators to reimagine the entire cartoon, individually, and in intervals of only a few seconds that are weird, creative, and jarring. The soundtrack is exactly the same, but every cel has been replaced, in very diverse styles.

Here is the original 1961 cartoon.

The Bird Who Came To Dinner - YouTube from Marcelo Glauco on Vimeo.

And here is the new South American twist. It's pretty fun to watch.

What spurred these animators to this project? I can't seem to find the answer, but it may have something to do with this: Like France's inexplicable love for Jerry Lewis, and the theory that "Germans Love David Hasselhoff," South Americans apparently love Woody Woodpecker.

via Mark Evanier and Cartoon Brew

It’s always great to see a master craftsperson at work. From Vanity Fair: “Watch as Tom Kenny seamlessly improvises the voices to 5 random cartoon characters that he has never seen before. Using his skills from decades as the voice of SpongeBob, The Ice King (Adventure Time), The Mayor (Powerpuff Girls), Heffer (Rocko’s Modern Life) […]

This is exactly how I’ve felt while cooped in my house these last few weeks and yes I mean “exactly.” The 2-minute film was created by AJ Jeffries, a 3D illustrator and animator based in Norwich in the UK. The only description or explanation given for it is this: “A horse struggles to exist.” That […]

Directed by Canadian-American filmmaker Ted Eshbaugh, this “Wizard of Oz” cartoon from 1933 predated the classic Hollywood movie by six years. From Wikipedia: The story is credited to “Col. Frank Baum.” Frank Joslyn Baum, a Lieutenant Colonel in the United States Army and eldest son of writer L. Frank Baum, was involved in the film’s […]