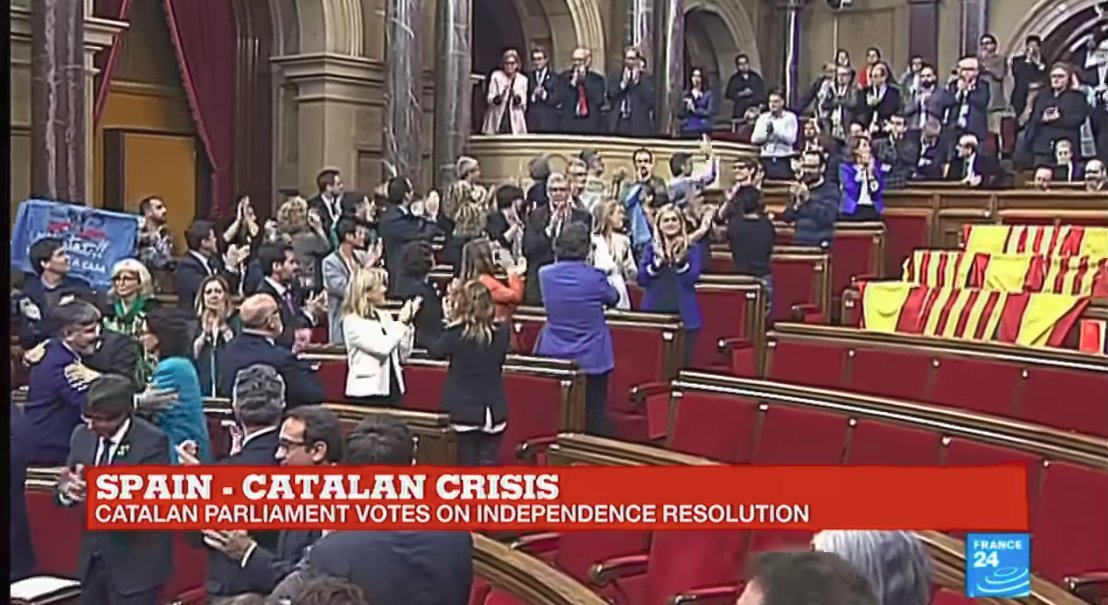 Yesterday, the Catalonian parliament declared independence from Spain; today, the central government in Madrid made good on its promise to impose direct rule on the region, firing the top tier of the government and the chiefs of the police force; Josep Lluís Trapero Álvarez, chief of the regional police force (Mossos d’Esquadra) has been charged with sedition for refusing to block polling places during the independence referendum earlier this week.

A general strike has been called for the coming week.

The central government has called regional elections on Dec 21.

There's some good critical analysis of the situation today in Naked Capitalism, including the fact that it's impossible to gauge the degree of support for independence in Catalonia today -- while it's never been a majority position, the heavy-handed violence and political shenanigans by the central government seem to have moved a lot of people from undecided to pro-independence.

The central government has yet to use finance in its battle against the independence movement: freezing the banks and shutting down payments "doesn’t generate dramatic video clips of thuggish behavior... it hits people in their wallets, often quickly."

What happens with the police force is key. Madrid has dismissed Catalonia’s chief of police and its director general. The chief of police was already being investigated for possible sedition charges.

The rank and file stood aside during the referendum, which led Spain to send in the Guardia Civil, which used what was widely decried as excessive force to try to shut down voting. If substantial proportions of the police force refuse to obey orders, Madrid will have an optical and practical problem on its hands.

No one knows how much support there is now for independence in Catalonia. Prior to the election and for years before that, independence never polled as a majority position. I have yet to see any polls post referendum. The high level of injuries during the election probably moved some fence sitters into the separatist camp, but how many? Moreover, even among the separatist parties, some would have been satisfied with more devolved powers, most important, Basque levels of spending autonomy, as opposed to a full divorce. But with support pre-referendum for independence at only a bit over 40%, if there were to be civil war (which per below, I see as unlikely unless Rajoy makes a bone-headed move, like sending in troops), it would seem to be at least likely to occur within Catalonia as between Catalonia and Spain.

If Madrid encounters widespread disobedience, its real nuclear weapon is the banking system. Restricting access to or shutting down the payments system in Catalonia would produce very different fault lines that the use of force to assert control. First, it doesn’t generate dramatic video clips of thuggish behavior. Second, it hits people in their wallets, often quickly. Small businesses and non-salaried workers will feel the pinch quickly.