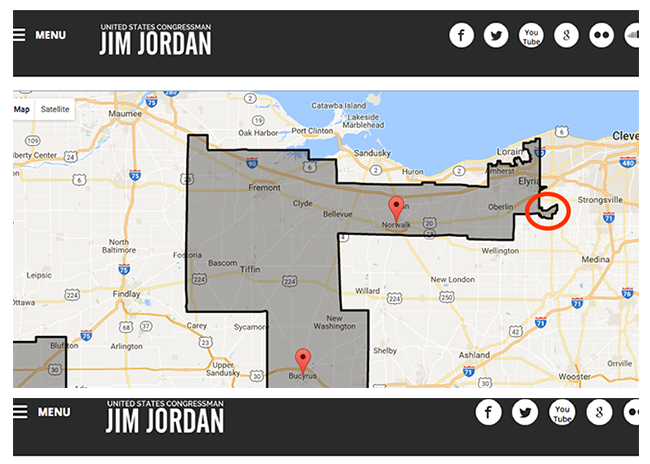 91% of the prisoners in Ohio are in Republican districts: they aren't allowed to vote, but they are counted in the census, creating winnable districts with tiny voting populations that would otherwise be included with large groups of nearby Democratic voters.

It's a little-understood bit of gerrymandering beyond the usual packing and cracking tactics -- more like the early 18th century English rotten boroughs, abolished in 1832.

Perhaps there is no better example than a corner of Republican Rep. Jim Jordan's 4th congressional district.

Jordan, from Urbana west of Columbus, represents a district that weaves from near the Indiana border to Elyria. The most unusual spot may be a hook-shaped area in eastern Lorain County.

The hook mostly includes Grafton, the eastern portion of which consists of some fields plus 3,350 state prison inmates, as illustrated below.

Jordan's district ranks second in Ohio for prison inmates, the cleveland.com analysis found, with 12,560 inmates as of early October at prisons in Grafton, Lima, Marion and Marysville.

But the lines for Jordan's district are not the only ones tracking closely around prison boundaries to provide important numbers of "residents" during redistricting. There are several examples in Ohio.

Prisons are important pieces in Ohio gerrymandering: Out of Line - Impact 2017 and Beyond [Rich Exner/Cleveland.com]