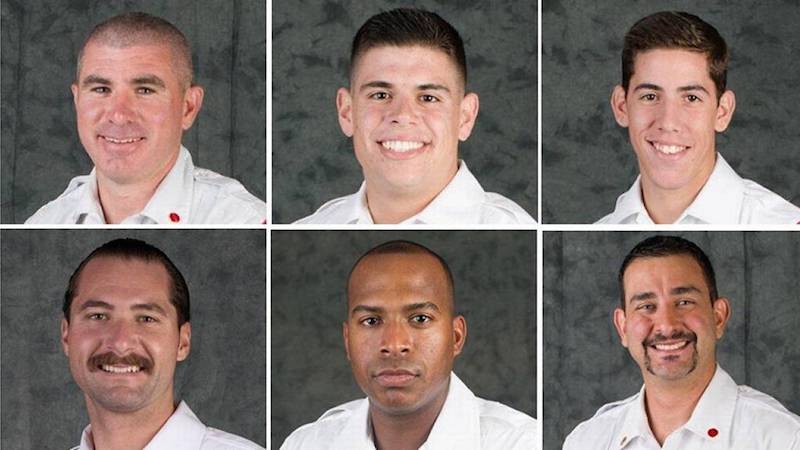 City of Miami firefighters William Bryson, Kevin Meizoso, David Rivera, Justin Rumbaugh, Harold Santana, and Alejandro Sese (pictured above) were fired over an incident in which a black lieutenant’s family photos were vandalized inside a fire station.

The City of Miami apparently mistakenly released the above photographs of the former firefighters, and would like media outlets to stop sharing them.

Via the Miami Herald:

After releasing the pictures of six firefighters fired over an incident in which someone hung a noose over a black lieutenant’s family photos inside a fire station, the city of Miami is now demanding that the media stop showing their pictures.

Just after midnight Friday morning, an assistant city attorney wrote an email to multiple news outlets demanding that the media “cease and desist from further showing the firefighters pictures in your coverage of this event.” Jones said the photos of the six men had been released accidentally.

“As former first responders, their photos are confidential and exempt under Florida’s public disclosure law and should not have been released,” wrote Kevin R. Jones.

The email was sent to the Miami Herald, WFOR, WPLG and the Associated Press, among other media outlets. The Miami Herald has decided to leave the photos on its website.

Jones’ email came about eight hours after a Miami Fire Rescue spokesman released images from the Sept. 9 incident at Miami Fire Station 12, in which several firefighters are accused of taking an African American lieutenant’s family photos from inside a fire station, removing them from their picture frames and drawing penises on them. The pictures were reinserted in their frames and then placed back on a shelf, according to termination letters sent Wednesday.

A noose made of thin white rope was then hung over one of the photos. Miami Fire Chief Joseph Zahralban has referred to the incident as “a hideous, distasteful act of hate.”

Robert S. Webster, the African-American firefighter and 17-year department veteran whose photos were defaced, told WPLG in an interview that his “first reaction was basically disbelief.”

“I knew it wasn’t a joke because of the progression of little things that were taking place,” he said.