Woman who flipped off Trump got fired from government contracting firm 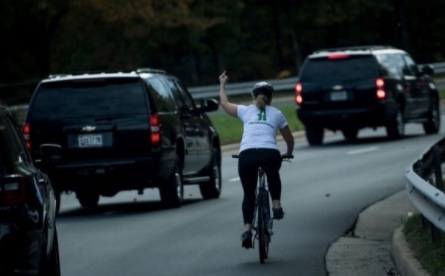 Last month, Juli Briskman, 50, flipped off the presidential motorcade passing her as she bicycled in Northern Virginia. A photo of Briskman's gesture went viral and last week she was fired from her job at Akima LLC, a government contracting firm. Even though she wasn't at work or wearing clothing that linked her to the company, her bosses claimed that she violated their social media policy:

"Covered Social Media Activity that contains discriminatory, obscene malicious or threatening content, is knowingly false, create [sic] a hostile work environment, or similar inappropriate or unlawful conduct will not be tolerated and will be subject to discipline up to an [sic] including termination of employment."

It gets even more obscene.


Because Briskman was in charge of the firm's social media presence during her six-month tenure there, she recently flagged something that did link her company to some pretty ugly stuff.


As she was monitoring Facebook this summer, she found a public comment by a senior director at the company in an otherwise civil discussion by one of his employees about Black Lives Matter.


"You're a f—— Libtard a——," the director injected, using his profile that clearly and repeatedly identifies himself as an employee of the firm.


In fact, the person he aimed that comment at was so offended by the intrusion into the conversation and the coarse nature of it that he challenged the director on representing Akima that way.


So Briskman flagged the exchange to senior management.


Did the man, a middle-aged executive who had been with the company for seven years, get the old "section 4.3" boot?


Nope. He cleaned up the comment, spit-shined his public profile and kept on trucking at work.