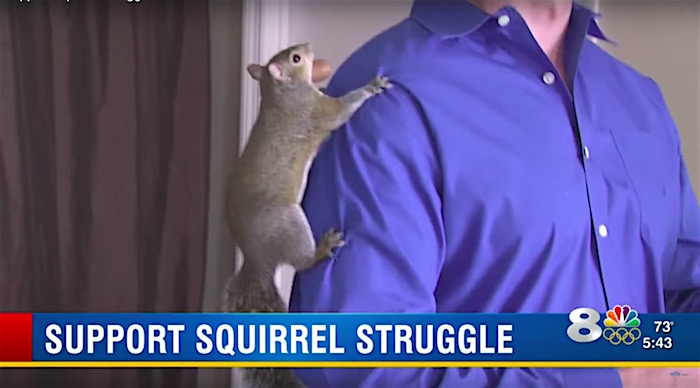 A condo association in Florida doesn't find the connection between Ryan Boylan and his support squirrel Brutis to be an adorable companionship fit for a Pixar film, but rather a concern that goes against management policy.

WFLA reports Island Walk Condominiums’ association in Clearwater Beach issued a notice to Boylan last month he would have to get rid of Brutis or face eviction under the condos’ no exotic animal policy.

A doctor’s note from July says Boylan has PTSD from a car crash and the squirrel he found last year “helps alleviate [his] challenges.”

The matter has turned into a series of legal differences involving time frames based on when Brutis was discovered by the association and when Boylan notified the board of his support animal. If Boylan’s accusation of discrimination doesn’t work out, acceptable places where he could live with his pet squirrel are: a tree; a jar of almonds; college campuses; and of course, those restaurants that contain large barrels of shelled peanuts for customers waiting to be seated.

In the complaint, attorneys state Boylan never submitted paperwork that Brutis was an emotional support animal until this past summer.

His doctor’s note was written in July.

Attorneys also state Boylan is residing in the unit as a tenant without having applied for and/or obtained approval from the association.

Boylan contacted the Office of Human Rights, claiming discrimination and they sent a letter to the association on his behalf, stating the Fair Housing Act, protecting emotional support animals.