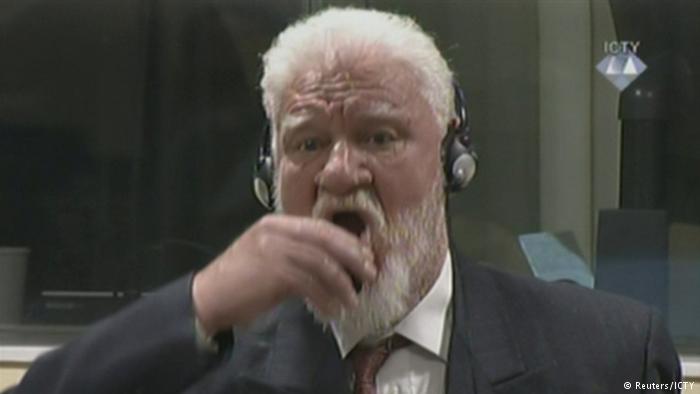 At his war crimes tribunal Wednesday, Bosnian Croat general Slobodan Praljak made a statement disdaining the court, then drank what he said was poison. He was rushed to hospital and died, according to reports, though courtroom footage depicts long moments of dithering confusion in the courtroom.

Praljak, who commanded ethnic Croat troops in the 1992-1995 war in Bosnia, yelled: "Judges, Slobodan Praljak is not a war criminal. I reject the verdict with contempt." He then drank from a small glass bottle in the courtroom. Moments later, as the court moved on to the next defendant, Praljak loudly announced "What I drank was poison."

The presiding judge called for medical assistance and ordered the session to be closed to the public. While the content of the bottle was not immediately clear, Praljak was hospitalized after the incident.

Note that the video below depicts Praljak's dramatic statement and his suicide.

In a dramatic turn of events, former Bosnian Croat General Slobodan Praljak appeared to drink what he said was poison at the ICTY. pic.twitter.com/V3yZLW5sBT