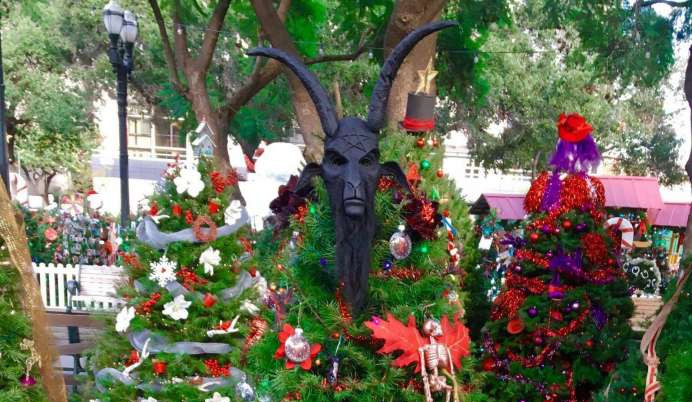 Christmas is under attack! The Satanic Temple was one of the many faith organizations who applied to put a tree at the record-breaking Christmas in the Park event in San Jose, an event that in no way abridged the separation of Church and State because it allowed any religion to participate.

The Satanists' tree was topped by a gorgeous, reverent likeness of Baphomet, his Capricious Majesty, created by a local artist and held sacred by the faith organization.

The sacred relic was stolen on Saturday, the first day of operation for Christmas in the Park.

Organizers with Christmas in the Park confirmed the theft and said that while it was a surprise that the Satanic Temple signed up for a tree, there were no issues with the group or their decorations. All different types of groups were allowed to decorate trees "regardless of whether we have the same beliefs as them or not" and the theft was "unfortunate," said Jason Minsky, executive director of Christmas in the Park.

"It's unfortunate that somebody took it upon themselves to do that," Minsky said. "Regardless of which organization or which tree they vandalize, we don't approve or condone that type of behavior by the public.

"I wish that somebody had stopped them when they saw it because it was during operating hours, but it's just kind of an unfortunate circumstance."