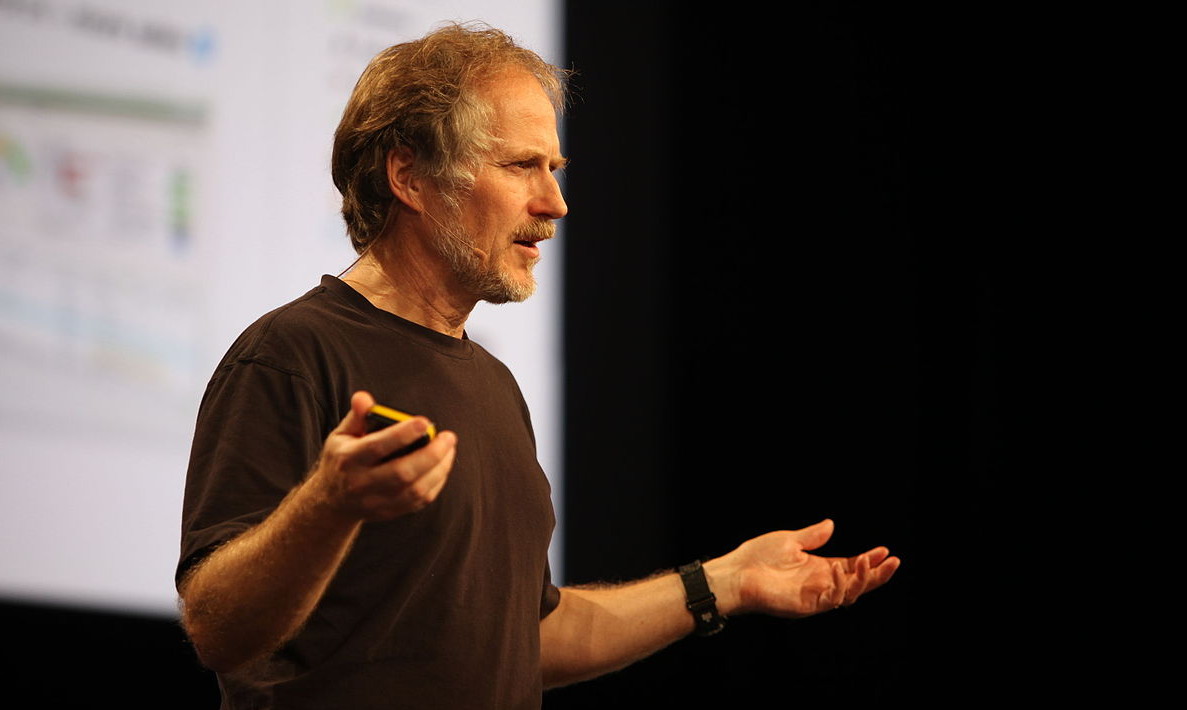 I clearly remember the first time I met Tim O'Reilly: it was the inaugural meeting of the Intel Peer to Peer Working Group, in 2000, convened to create order out of the explosive chaos of P2P startups that had sprung up in the wake of Napster's runaway success (Napster at the time was the fastest-adopted technology in the history of the world).

We all sat there, us hopeful entrepreneurs, engineers, and hangers-on, and listened as Intel laid out the game plan. They would create a pyramid with a few incumbent technology giants at the top, paying six-figure dues and getting the final say in the group's disposition. The rest of us would pay five figures for the privilege of sitting silently in the back row and listening while the big guys decided what we'd do.

We were lulled into a kind of hypnotic paralysis. I remember thinking that it sounded terrible, but everyone else was going along with it, and after all, what did I know about how standardization of a new industry worked? Maybe this was how it was supposed to be.

Then Tim O'Reilly stood up and tore into Intel. The promise and excitement of P2P was the deconstruction of hierarchy, the power of anyone to talk to anyone about anything without permission or interference from anyone else, an evolution in the internet's own pluripotent "end-to-end" principle. Why was Intel imposing mainframe, command-and-control thinking on a system that promised the abolition of such a thing?

It was like being woken from a dream. I remember looking over at Tim and flashing on the Norman Rockwell painting, "Freedom of Speech," and realizing that goddamnit, he was right, this was bullshit. He was right, and that speech, I believe, killed the plan Intel had to control and tame the P2P world.

We live in a curious moment, now, when our technology, our institutions, and our heroes are unraveling, and their darkest aspects are overshadowing all the benefit they've brought us. From Louis CK to Google, from the Democratic Party to cryptography, from GMO to geoengineering, we are in the midst of a reckoning, and forced to confront the uneasy contradictions that we can no longer paper over. That's where WTF? comes in.

Recall that so much of what we love has always had a dark side lurking in it. Mark Twain's young girls and Lewis Carroll's younger girls; Gandhi's deplorable treatment of his wife; Orwell's naming names to the secret police; Walt Disney's rabid, far-right union-busting; and so on.

Historically, we've treated these deeply flawed people as having only two possible states: shameful and banished, or papered over and angelic. The cost of acknowledging the sins of these people was to give up their works: you couldn't honor Gandhi's principled work if you admitted his misogyny, so you buried the misogyny to preserve the principle. This meant that the survivors and victims of monstrous deeds had to have their pain weighed against the legitimacy of the works of the people who inflicted it.

It's a false dichotomy that works in the abuser's favor. If the cost of acknowledging Louis CK's rapey behavior is denying the merit of his comedy, then a survivor of that behavior has to convince us not to merely condemn CK -- she has to convince us to reframe our history with his work. The reality is that Louis CK made good art and did terrible, unforgivable things. The unforgivable things doesn't change the intrinsic merit of the work (though it obviously taints our view of it), and the path to confronting the behavior is much more direct and easier to traverse if we acknowledge this.

The same is true in business and technology. The convenience of Amazon and Uber, the pleasures of Facebook, the miraculous knowledge-augmentation of Google, the design of App Stores, the brilliance of Netflix -- they are all real, and true. And also real and undeniable are the abuses of these companies: deliberately addictive technology that abuses our mental health; tax evasion, monopolism, and Zuboffian Surveillance Capitalism with all that entails.

The question is, can we have one without the other? The answer from Facebook, Twitter, Google, Amazon, Comcast, Apple, Uber, et al is no. If you want to be able to switch from hailing cabs by waving your arms and praying to pressing a button; if you want to be able to search all the world's knowledge; if you want to keep in touch with friends (or foment revolution); if you want rollicking political debate, etc, etc, then the price you pay is all the baggage of late-stage capitalism: extreme wealth inequality, labor abuses, waste, surveillance, control.

Tim O'Reilly's history with computers and the internet pre-dates the rise of these grotesqueries, the financialization of the tech sector. He writes beautifully about the passion, the excitement, and the tremendous progress that technologists (from every walk of life) have brought to the tech sector, and cleanly cleaves the technology from its economic and political context. He dares to assert that we can love the sin and hate the sinner. That the reason tech went toxic was because unethical people made unethical choices, but those choices weren't inevitable or irreversible.

The progressive insistence that the baby is inseparable from the bathwater works to the favor of big business and big tech. If technology's critics insist that you have to choose between Facebook and surveillance and manipulation, they affirm Facebook's own position. But if critics insist that Facebook has deliberately, cynically married something wonderful with something terrible, they invite people to join their case and fight for a good Facebook, rather than demanding a kind of antitech hairshirt that insists that you have to give up, not demand better.

WTF? is a book about technology as it was, as it is, and as it could be. It is told from the perspective of someone who has been personally present at the most important moments in the fast-paced history of tech, and who played a significant role in those moments. It's a rare and important piece of criticism that inspires even as it dissects. Please do read this book.

WTF?: What's the Future and Why It's Up to Us [Tim O'Reilly/Harperbusiness]