Doctors follow man's tattoo’s instructions that say "Do Not Resuscitate" 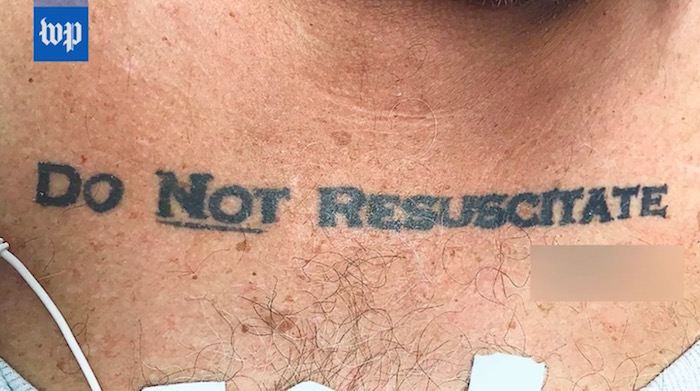 A Florida ICU staff faced a difficult ethical dilemma concerning a 70-year-old patient and a tattoo on his chest — ultimately reaching a decision that still doesn’t set a precedent for similar situations.

The patient was brought by paramedics to the hospital unconscious with a high blood alcohol level, along with a history of medical issues, according to a newly published article in The New England Journal of Medicine.

When the patient's health began to further decline, the staff was forced to consider the man’s “Do Not Resuscitate” tattoo along with what was believed to be a tattoo of his signature underneath. The staff originally decided against following the tattoo's orders saying it was an “irreversible” decision that shouldn’t be left to potential body art or a drunken mistake.

Due to his inability to verbally communicate his wishes, the staff called for an ethics consultation, and in the end they decided to follow the tattooed request.

After the order was given, the hospital was able to locate the man’s out-of-hospital Do Not Resuscitate (DNR) order from the Florida Department of Health, which matched his tattoo. The patient later died without undergoing CPR or anymore life-saving efforts.

The doctors considered it a “relief” to find the written DNR order.

Via New England Journal of Medicine.