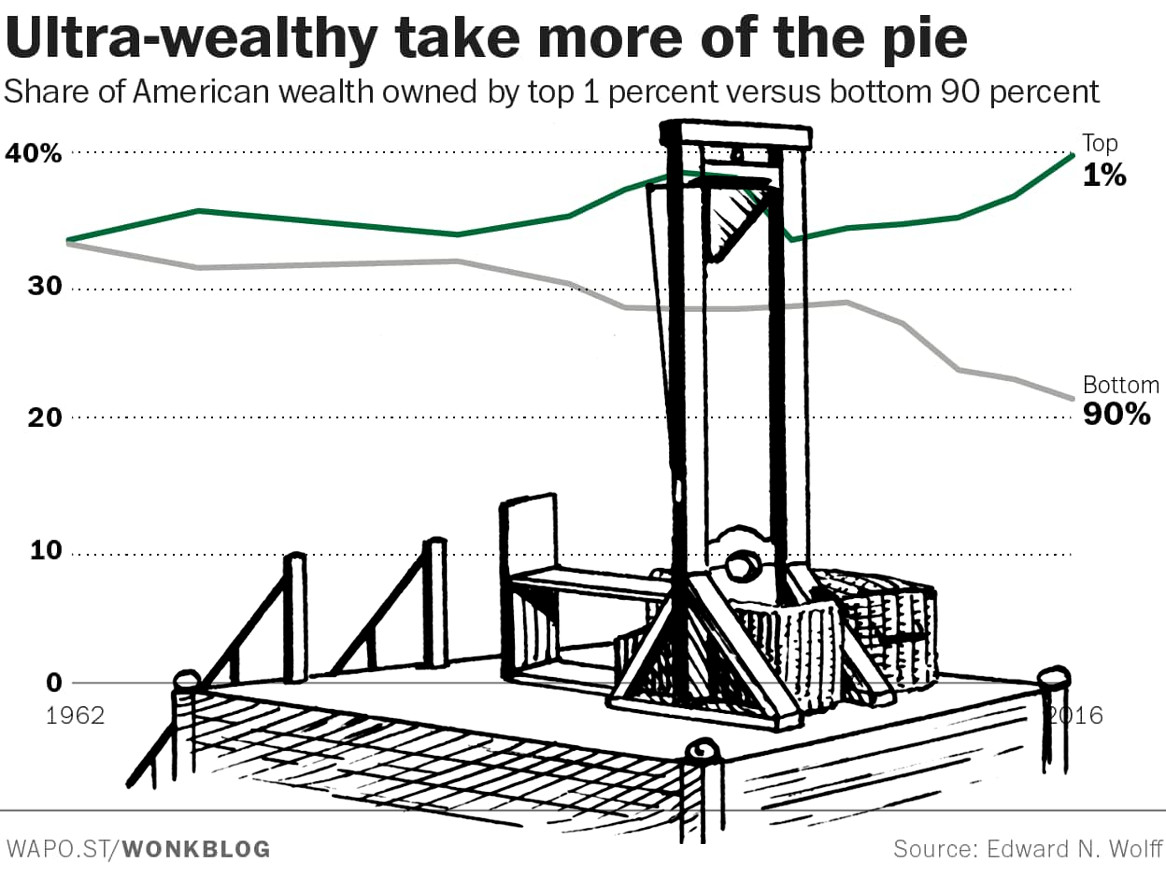 In Household Wealth Trends in the United States, 1962 to 2016: Has Middle Class Wealth Recovered?, an NBER working paper by NYU economics professor Edward N. Wolff, we get an analysis of the annual US governmental Survey of Consumer Finances, revealing that the share of national wealth owned by the richest one percent of Americans has risen by three points since 2013, to more than 90%, the highest level in half a century.

The wealth transfer over that period went primarily from the middle class to the rich (America's poor are out of money and credit, so wealth transfers are moving up the pyramid of wealth-distribution).

Note that this number is different from the annual Unicef headline figure of 8, or 4, or 3 richest people on Earth "owning more" than the poorest 50%. Those figures tell an interesting story, but they miss out on the fact that the balance sheet for 40% of the world's population is zero or negative (that is, they owe more money than the total value of all their assets), meaning that if you have one penny, you control more wealth than 40% of the world, combined.

This study is about the relative shift: the richest got a lot richer, in a short period, while the middle classes got poorer, and the money they middle classes used to have are now in the hands of the very richest people in America, who are richer than they've been in generations.

Asset prices plunged between 2007 and 2010 but then rebounded from 2010 to 2016. The most telling finding is that median wealth plummeted by 44 percent over years 2007 to 2010. The inequality of net worth, after almost two decades of little movement, went up sharply from 2007 to 2010, and relative indebtedness for the middle class expanded. The sharp fall in median net worth and the rise in overall wealth inequality over these years are largely traceable to the high leverage of middle class families and the high share of homes in their portfolio. Mean and median wealth rebounded from 2010 to 2016, by 17 and 28 percent, respectively. While mean wealth surpassed its previous peak in 2007, median wealth was still down by 34 percent. More than 100 percent of the recovery in both was due to a high return on wealth but this factor was offset by negative savings. Relative indebtedness continued to fall for the middle class from 2010 to 2016, and wealth inequality increased somewhat. The racial and ethnic disparity in wealth holdings widened considerably between 2007 and 2016, and the wealth of households under age 45 declined in relative terms.