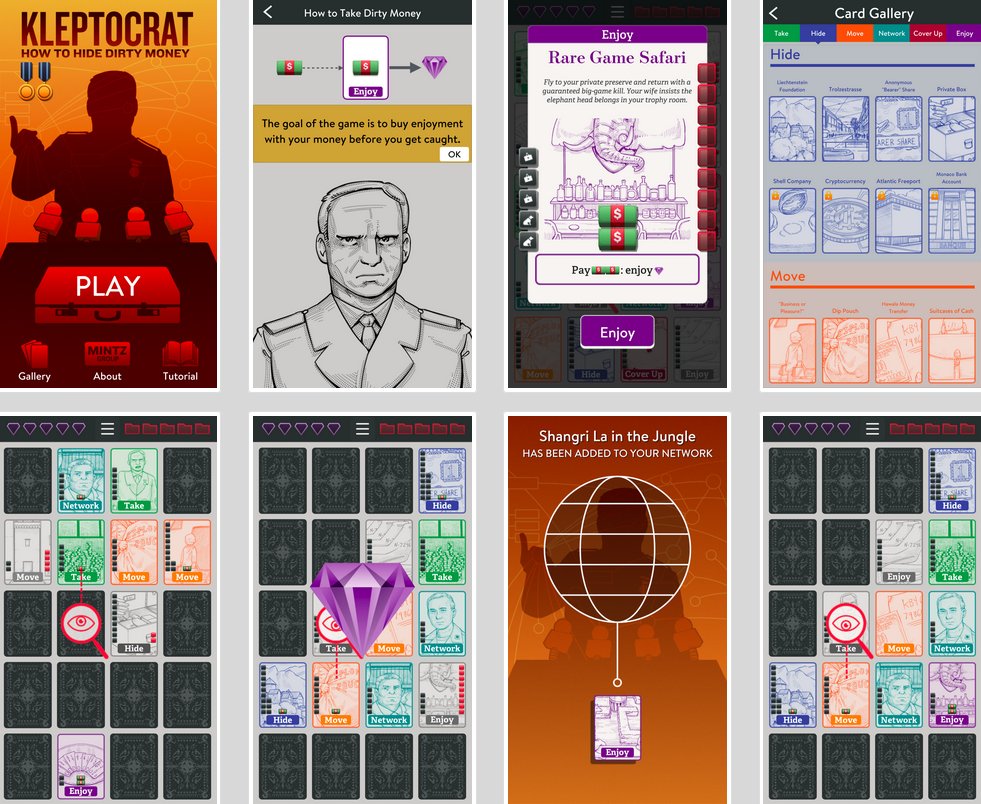 Kleptocrat is an Ios-only mobile game that challenges players to play as billionaire tax-dodgers, who construct ruses to hide their money from the tax authorities in the countries where the state guards their wealth, educates the workforce, and keeps everyone from dropping dead of infectious diseases.

It's from The Mintz Group, investigative/forensic accountants who specializing in finding hidden offshore wealth; they've infused the game with strategies from the real record of criminal tax-evasion, like moving money into an offshore corporation whose ownership is in the form of bearer shares (a favoured tactic of David Cameron's father!). You can "steal defibrillators from impoverished hospitals, then use that cash to shoot elephants on a rare game safari" or send an errand boy halfway around the world with a suitcase stuffed with cash that's used to buy an original Elvis jumpsuit (that's how Teodoro Obiang, son of Equatorial Guinea's dictator, bought one of Michael Jackson's gloves!).

The main issue with Kleptocrat is that it’s far too difficult to be realistic—try as I might, I just can’t get beyond a third term. The game’s information page has a disclaimer: “By the way, before you think of using Kleptocrat for ideas on actually hiding your money, just remember: In all the cases we studied, sooner or later the corrupt officials were exposed.”

Unfortunately, history shows that officials whose corruption is exposed aren’t necessarily ousted. The Panama Papers exposed a score of national leaders or people close to them. The prime minister of Iceland quickly resigned, but he’s the head of a tiny, democratic island. Pakistan’s Nawaz Sharif followed a year later, but not one of Pakistan’s 18 prime ministers has completed a full term in office—and there are questions as to whether the case against Sharif was driven more by internal politics than genuine outrage over his alleged corruption.