I rode Amtrak's Coast Starlight the wrong direction. I still loved it. 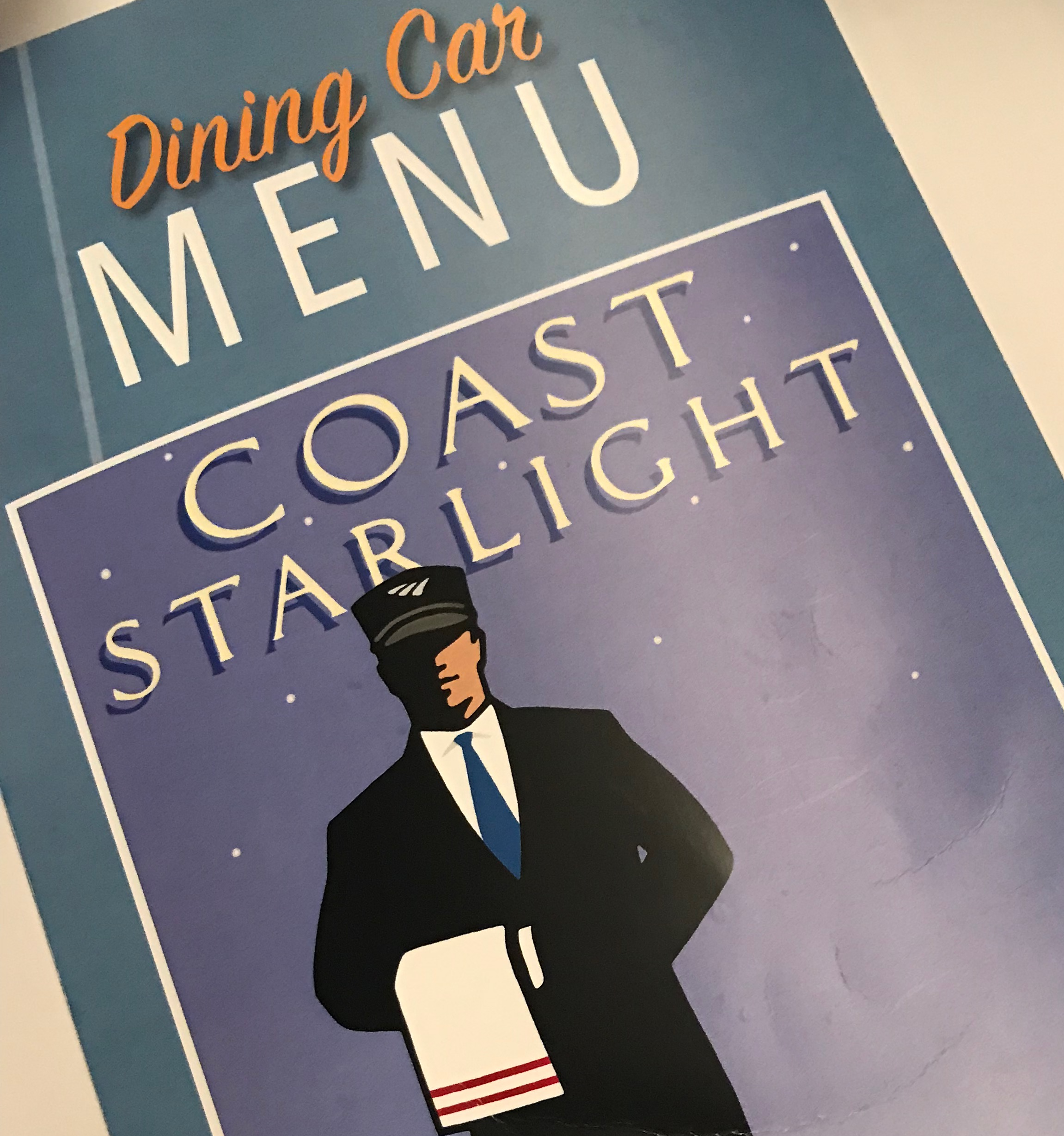 "Toot toot!" I yelled, as my friends and I were delayed and waiting around at the San Francisco Bay Area's Emeryville Station, waiting for the Amtrak Coast Starlight train to arrive.

I was being paid $1 every time I yelled "toot toot!"

The train was probably my idea. I am not sure why I'm reluctant to take credit, but I've always wanted to ride Amtrak's Coast Starlight. Trip Advisor says the Coast Starlight is the 1050th most fun thing to do in California. Also, I like slow travel. I drive a goddamn VW Vanagon when I go on vacation, and that should tell you enough.

Some friends and I were heading to see Puddles Pity Party in Los Angeles that weekend. We'd all traveled from the Bay Area south to the City of Fallen Angeles so many times in 2017, we needed a break from driving and airports. Amtrak seemed like a great adventure. I like adventure.

I did not consider, however, that the coast part of the Coast Starlight, at least on the SF to LA leg of the trip, would be transited at night. As in, when it is dark. And you can't see. I did see some interesting California scenery, and experience what may be the very best Amtrak has to offer, but this isn't a review of the LA to SF trip, which is actually lets you see the coast.

Our train was two hours late. Surprised? Luckily, I had packed a bunch of edibles and some pre-rolled joints. Just outside the San Francisco Bay Area's Emeryville Station is a fantastic place to pause and not care so very much about your schedule. Honestly, if you are gonna take a train -- this is the way to fly. There are also 'smoke stops' along the route, just ask your conductor.

When the Coast Starlight arrives, passengers have to find their train car fast. We were traveling in business class, which meant that our door would be the farthest down the line. The business class car is sandwiched between the dining and observation cars, both of which are AWESOME on a 12 hour journey to Los Angeles. We were seated, handed complimentary bottles of water, and we experienced PLENTY of space for the first time in recent travel memory. Each person in our party of four was able to take a full 2 business class seats and spread out. There were very few other passengers in this $30 a person more car. What you get for that $30 extra seems to be SPACE, a $6 voucher off food (which you will use) and a bit of priority in making dining car reservations. Once we were seated on what we assumed would be the view side of the train, it was time to explore.

The snack shop is in the bottom of the observation car. The observation car is a great, though slightly less comfortable, place to sit, read and watch the scenery go by. I spent several hours here, with headphones in and Kindle out. Occasionally you'll look up and stare in marvel for a bit at how beautiful California is, even in its inland valleys. Most of the first 7 or 8 hours, the rails parallel the 101. You get a very different view, as the train tracks are typically sandwiched on either side by farms. I was struck by the cruelty of chicken farms, the beauty of rolling past rows of worked farmland, and the sheer number of homeless encampments.

The dining car is a fantastic experience. If you are traveling in a group smaller than four, you will be seated with others. You will meet an amazing blend of folks traveling on America's trains. All sorts of folks are on Amtrak, and you have nothing but time to get to know them! I met some Mennonites and a really large dude who was too big to fly on an aeroplane. That big dude had a "Leeeeroy Jeeeeeeenkis" ID tag hanging off his duffle, so I immediately knew he was cool.

While the people are colorful, the food is bland. You will find hamburgers, hot dogs, chicken, fish and steak on the menu. The food is better than anything I've had in First Class on an international airplane trip -- but its still nothing to write home about. I'd put Amtrak dining at about Disney in park concession quality. The prices aren't bad and the service is SUPER. Happily, Amtrak also carries an assortment of bottled beers and boxed wines. There were some "mixed" drinks available, but I'd seen them come from cans in the snack shop, so I passed.

The snack shop has some stuff, but I suggest packing your own, especially if you get the munchies. Amtrak's got beer, wine, sodas, candies and chips in a very limited selection. Curling up comfortably in your big old double armchair, with some great snacks, music and a book for 3-4 hours is totally do-able, but may take some planning if you are picky.

There is a special bar and dining car for people in sleeper cars. As a business class passenger it seems you MAY be invited in for a wine and cheese tasting IF there is space, but on my journey the 1% bastards in sleeper cars sucked up all the fine wine. Even our conductor couldn't pull off a quick photo tour for me. It is supposedly a real old timey train parlour car. I can not wait to see all the comments in this blog post telling me how I wasted a 12 hour trip by missing it.

The staff are all wonderful people. I think our conductor Joseph was living his dream. While I merely yelled "toot toot!" over and over again, Joseph displayed mastery at yelling "All Aboard!"

He also made sure our trip was wonderful. The service folks in the dining car and snack shop all seemed to be having the time of their lives, and were super happy to help you. I've never seen people so happy to be at work. Really. Amtrak!

The Coast Starlight pulled along the pitch black southern California coast, where we saw a few oil rigs, and then pulled into LA's fabled Union Station. It is ghastly ugly from the arrivals view point. The showpiece building is lovely, but you walk through a lot of rusted corrugated metal to get there.

I loved Amtrak and am looking forward to taking another trip, however, I'll look more carefully at the schedule and routes before future trips. South to North is the way for the Coast Starlight.

Also, this was stuck in my head the entire trip.