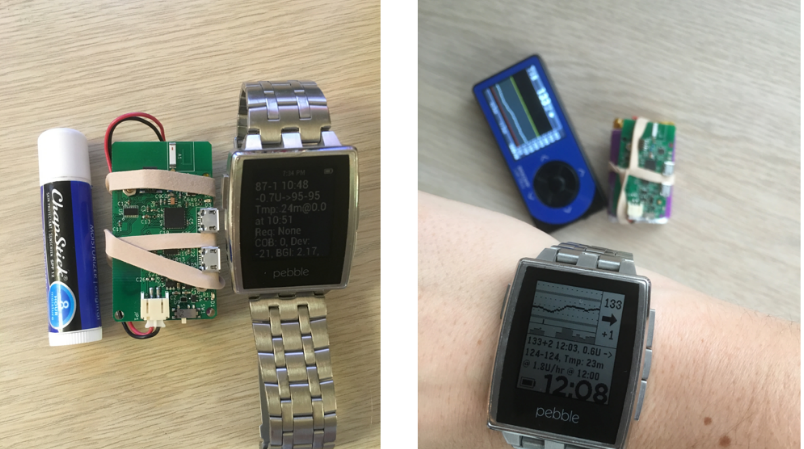 Dana Lewis kickstarted the Open Artificial Pancreas System (previously) by trying to solve her own problems with monitoring her glucose levels, calculating insulin doses, and administering them around the clock -- an onerous task that her life depended on, which disrupted her sleep and challenged her to make reliable calculations regarding dangerous substances while her blood-sugar levels were troughing or spiking.

The project distributes plans, not hardware, thus sidestepping the need for regulatory approval.

The first models were large and unwieldy, based on Raspberry Pi processors; the latest use Intel Edisons and fit in an enclosure the size of a Tic Tac box.

They had built an algorithm based on the data to predict the future. But it was still basically just an open loop. She got a recommendation from the monitor and had to act. She had to decide "what level of action do I want to be woken up for?"

The next step came quickly.

"We thought, wouldn't it be nice if, on the insulin side, instead of having to wake up and push a button on my pump, it could automatically adjust the pump for me," Lewis said.

She wasn't sure she needed this - she'd solved the super-sleep problem, after all - but social media stepped in again. "We found somebody else who had figured out how to directly communicate with my insulin pump and actually send commands to it," Lewis said. "And he's like, 'You know, you could plug this into your system and actually send commands to your insulin pump.' And he, too, shared his code. That's what open source is: free sharing of code."

They closed the loop. Result: an artificial pancreas that monitors blood sugar and controls the insulin pump.

Alabamian with diabetes built her own artificial pancreas, gives away plan for free [Lee Roop/AL]