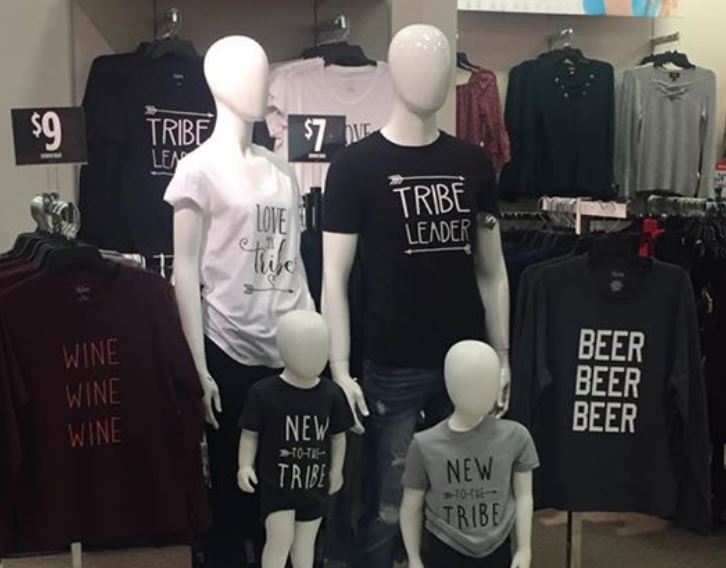 JCPenney, whose name I did not realize no longer contains a space in it, removed a racist display from their Sioux City, Iowa location. Mannequins wore various "Tribe" themed clothing.

The decorative use of arrows really ends the need for apologists to try. The additional WINE and BEER shirts make me pretty angry.

The JCPenney at Southern Hills Mall, a shopping mall in Sioux City, Iowa is under fire on social media after Facebook posts including a video and a photo were created by Iowa resident Michelle Free-LaMere. The video posted by Free-LaMere has gone viral having received 51k views within two days of being posted. The video currently stands at 101k views.

The posts contain four mannequins wearing different ‘Tribe-themed’ t-shirts that say ‘Tribe Leader,’ ‘Love My Tribe’ and ‘New to the Tribe’ which are standing between additional t-shirts with the phrases ‘Wine Wine Wine’ and ‘Beer Beer Beer.’

Comments on social media have been largely negative toward JCPenney.

“Just sad and disrespectful,” said Katrina RedOwl from Pasadena, California. Mikki Naranjo from Ignacio, Colorado said she will no longer shop at the store. “That is just disgusting of Management of JCPenney put that display up. I will no longer shop there!”

Babbling Secretary of the Interior Ryan Zinke somehow feels native tribes people have a deep love and respect of the Confederacy. The United States must keep its Confederate memorials for the sake of the natives! Employing racism to excuse racism, Zinke referred to first tribes people as “native Indians” and attempted to draw a false […]