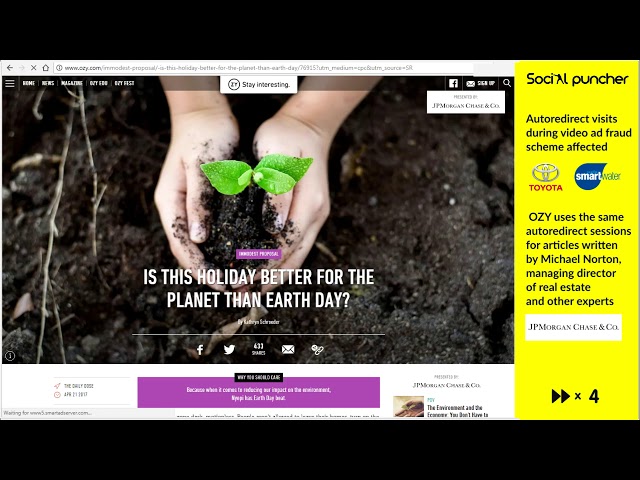 Ozy was paid to run sponsored stories for clients such as JPMorgan. Ozy, among many others, bought traffic to run up the page view counter, making them appear successful and exposing sponsors' branding to "millions" of "readers". Now the nature of that traffic has been exposed and excuses are being made.

The incident is the latest glimpse at the roots of a crisis of trust in online publishing. Blue-chip advertisers increasingly doubt whether their online ad spending reaches real audiences, and JPMorgan in particular has taken steps to ensure its ads only appear on quality sites. But even quality sites present risks.

Working in collaboration with ad-fraud consultancy Social Puncher, BuzzFeed News identified several other reputable publishers who also received the same invalid traffic during a similar timeframe as Ozy. They include Funny or Die, a video comedy site founded by actor Will Ferrell and several Hollywood producers; Community Newspaper Holdings Inc., a publisher of local newspapers in more than 20 states, which receives the traffic as part of a deal with video company Tout; Bustle Digital Group, a fast-growing digital publisher focused on young women; and PCMag, the venerable computing publication. All except CNHI say they have stopped using the traffic in question.

The charitable view, which casts publishers as desperate rather than fraudulent, is that they think human beings were paid to visit the sites. Even then, this is as legit as chaining a dog to a TV set because someone told you Nielsen boxes are motion-activated. Buzzfeed reports that it's all bots anyway.

Opinion Editor James Bennet is out at the New York Times, resigning after the backlash to Tom Cotton’s column calling for a military crackdown on Americans protesting police brutality. Mr. Bennet’s swift fall from one of the most powerful positions in American journalism comes as hundreds of thousands of people have marched in recent weeks […]