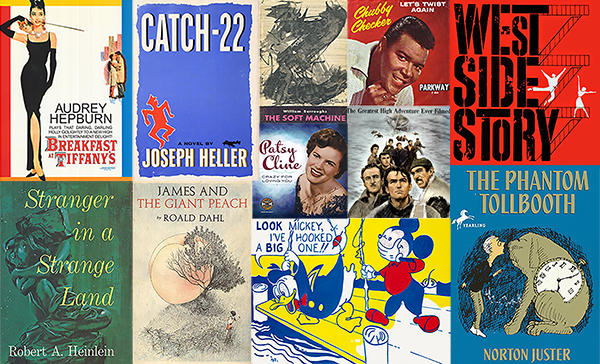 The montage above shows works that could have entered the public domain in the US if we had the copyright term that existed until 1978 (a maximum of 56 years). But no.

When the USA decided to retroactively extend the term of copyright, it deprived itself of free, open access to important cultural treasures that new creators could build upon as creators have done since time immemorial.

Luckily, Canada and the EU were not so foolish, and so today, there is a raft of work entering the public domain elsewhere in the world that US creators and audiences will not be able to freely use.

A selection of works that could have entered the public domain in the USA this year: works from 1961 including Catch-22, Stranger in a Strange Land, The Soft Machine, The Phantom Tollbooth, Franny and Zooey, Breakfast at Tiffany’s, West Side Story (the movie)... all copyrighted until 2057. And, yes, scientific articles from 1961 are still behind paywalls.

Works that Canadians and Europeans can freely use, as of tomorrow: in Canada, the works of René Magritte, Langston Hughes, Dorothy Parker, and many more. In the EU, the works of Hugh Lofting (the Doctor DoLittle books) and William Moulton Marston (creator of Wonder Woman!).

What is entering the public domain in the United States? Not a single published work. Once again, no published works are entering our public domain this year.2 (Happily, works published in 1923 will finally begin to enter our public domain next year.) The only works that are clearly in the US public domain now are those published before 1923. But what about works published after that date? Does that mean that they’re still under copyright? Well, maybe. Citizens of the United States have to live with a frustrating lack of clarity about what older works they can use. Did the author comply with registration or renewal requirements when those were mandatory?3 The records are fragmentary and confused, the copyright holders hard to find. Perhaps some post-1923 works by the authors above are in the public domain. Perhaps they are still copyrighted. We have to live in a fog of uncertainty, uncertainty that benefits no one. By contrast, in Canada and the EU, the public will know on January 1 that all works by these authors are in the public domain.

When the first copyright law was written in the United States, copyright lasted 14 years, renewable for another 14 years if the author wished. Jefferson or Madison could look at the books written by their contemporaries and confidently expect them to be in the public domain within a decade or two. Now? In the United States, as in much of the world, copyright lasts for the author’s lifetime, plus another 70 years. You might think, therefore, that works whose authors died in 1947 would be freely available on January 1, 2018. Sadly, no. When Congress changed the law, it applied the term extension retrospectively to existing works, and gave all in-copyright works published between 1923 and 1977 a term of 95 years. The result? None of those works will enter the public domain until 2019, and works from 1961, whose arrival we might otherwise be expecting January 1, 2018, will not enter the public domain until 2057. In addition to lengthening the term, Congress also changed the law so that every creative work is automatically copyrighted, even if the author does nothing.

What do these laws mean to you? As you can read in our analysis here, they impose great (and in many cases unnecessary) costs on creativity, on libraries and archives, on education and on scholarship. More broadly, they impose costs on our collective culture. We have little reason to celebrate on Public Domain Day because our public domain has been shrinking, not growing.