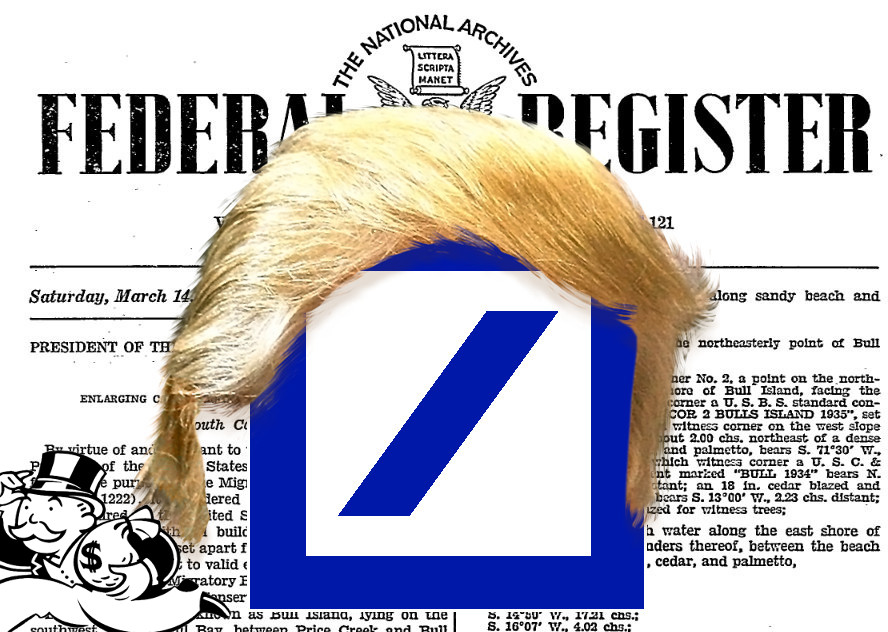 The Trump Administration just published a small notice in the Federal Register announcing that it would waive the outstanding criminal sanctions against some of the world's largest banks, Citigroup, JPMorgan, Barclays, UBS and Deutsche Bank.

The banks were facing sanctions stemming from a variety of wrongdoing, including the trillions' worth of fraud in the LIBOR scandal, and Deutsche Bank's role in laundering $10B for Russian oligarchs.

All told, Deutsche Bank and its co-lenders have given the Trump Organization over $2.5B in loans.

The Obama administration -- whose official policy was to never jail bankers regardless of their wrongdoing and the harm it caused -- had already given waivers to all the affected banks. The Trump administration has extended those waivers for years more.

All five of the banks granted waivers from the Obama and Trump administration were fined for their involvement in the LIBOR scandal that led to $9 billion worth of fines from regulators around the world. Deutsche Bank has paid $3.5 billion for its role in the scandal, more than any other bank. The scandal involved illegally manipulating the London Interbank Offered Rate or LIBOR, which is used to set the cost of borrowing for a variety of financial transactions.

In 2015, Deutsche Bank pled guilty in the U.S. to wire fraud for its role in the scandal. Less than two years later, in the final hours of the Obama administration, Deutsche Bank agreed to a $7.2 billion settlement with the Justice Department for misleading investors in mortgage-backed securities between 2006 and 2007.