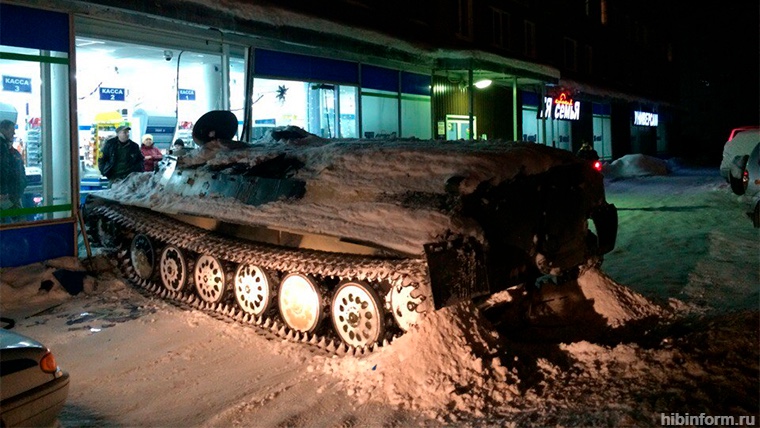 In northern Russia, a man who really wanted some booze drove an armored personnel carrier through a shop window, crashing into the store, then exited his vehicle and climbed through the wreckage to steal a bottle of wine. I know this will shock you, but he was drunk.

The incident took place in Apatity, Russia on Wednesday morning. Images first appeared on Russian social media site HBinform.ru, on this random bystander's twitter, and video (which is quite something to behold) at ria.ru.

The thirsty gentleman pilfered the vehicle from a “privately-run motorsport training ground nearby,” reported Reuters. He drove it through a forest and into the small town which is situated just south of the Arctic circle.

He's in his late twenties, and did not resist arrest.

Struggling to turn around in a narrow street, the man, whom witnesses described as being drunk, proceeded to slam the tank into the window of the “Family” convenience store, the news agency said.

He also crushed a Daewoo car parked nearby, images showed.

Footage shared on social media showed the man subsequently exiting the vehicle through its hatch, briefly inspecting the damage, and entering the shop through the broken window.

He was later arrested in possession of a stolen bottle of wine, Hibinform said. The shop was not licensed to sell alcohol that early in the morning, the agency added.

Witnesses visible in the footage did not seemed particularly disturbed by the incident.

“Basically some guy stole an armored vehicle... and went into a shop to top up his stocks in the morning,” the social media user described, whilst filming the snow-covered scene out of his window.