The wild physics of superblack "bird of paradise" feathers 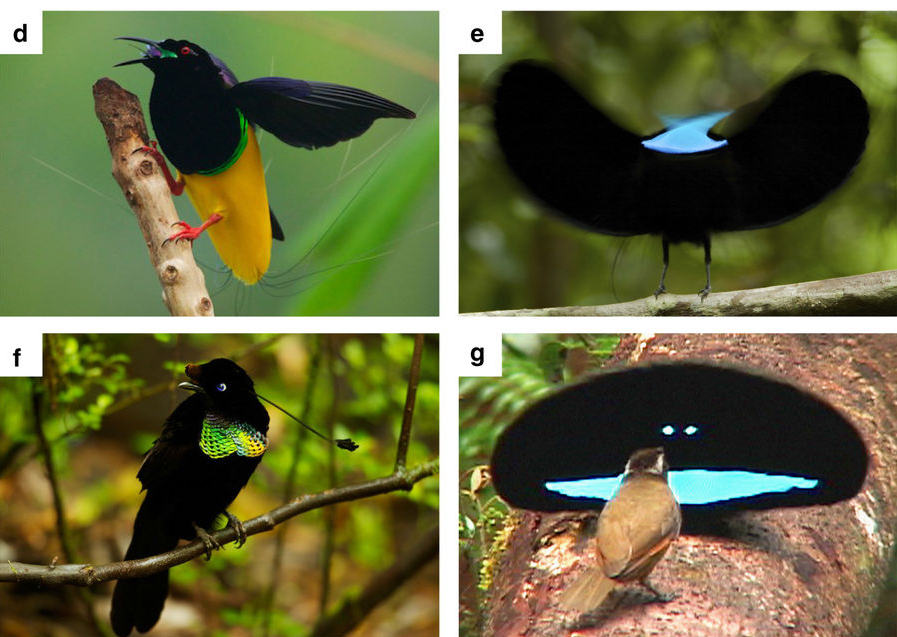 How are the feathers of Papua New Guinea's "birds of paradise" so freakishly black?

Because, man, they really are. Crows and blackbirds look, y'know, black-like ... but birds of paradise look like a hole has been punched in reality. It's like they've been coated in Vantablack, the freakily engineered substance you can coat on objects to make them superdark. The birds also often have striking colors, of course; but the parts of them that are black are inkily so.

A team of biologists have finally published a paper unraveling the secret: The feathers, it transpires, are essentially covered in light-trapping nanotech.

As the Atlantic reports:

A typical bird feather has a central shaft called a rachis. Thin branches, or barbs, sprout from the rachis, and even thinner branches—barbules—sprout from the barbs. The whole arrangement is flat, with the rachis, barbs, and barbules all lying on the same plane. The super-black feathers of birds of paradise, meanwhile, look very different. Their barbules, instead of lying flat, curve upward. And instead of being smooth cylinders, they are studded in minuscule spikes. “It’s hard to describe,” says McCoy. “It’s like a little bottle brush or a piece of coral.”

These unique structures excel at capturing light. When light hits a normal feather, it finds a series of horizontal surfaces, and can easily bounce off. But when light hits a super-black feather, it finds a tangled mess of mostly vertical surfaces. Instead of being reflected away, it bounces repeatedly between the barbules and their spikes. With each bounce, a little more of it gets absorbed. Light loses itself within the feathers.

The feathers absorb up to 99.95 percent of all incoming light, which, as it turns out, is pretty close to Vantablack itself, which captures 99.965 percent.