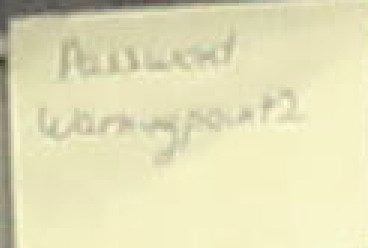 Hawai'ians and the rest of the world want to understand why they were warned of their imminent demise -- what kind of bad design choices could allow such a thing to happen?

Naturally, this has triggered a flurry of stories delving into the Hawai'ian emergency management agency, and a rush of editors looking for stock art to illustrate it, leading to an old AP photo being unearthed.

The photo depicts Jeffrey Wong, an operations manger, standing by his workstation, which flutters with yellow post-its; one of them clearly reads "PASSWORD: warningpoint2."

The agency has confirmed that this is a real password for an "internal application," but adds that it "wasn’t for any major piece of software."

Old photos from the Associated Press inside the agency’s office appear to show an unspecified password on a yellow Post-It note, stuck to a computer monitor. The image, which shows operations manger Jeffrey Wong standing in front of the computer, was taken in July and appeared in articles published at the time about the agency’s preparedness in the face of a nuclear threat.

(Image: enlarged thumbnail from a photo by Jennifer Sinco Kelleher for AP)