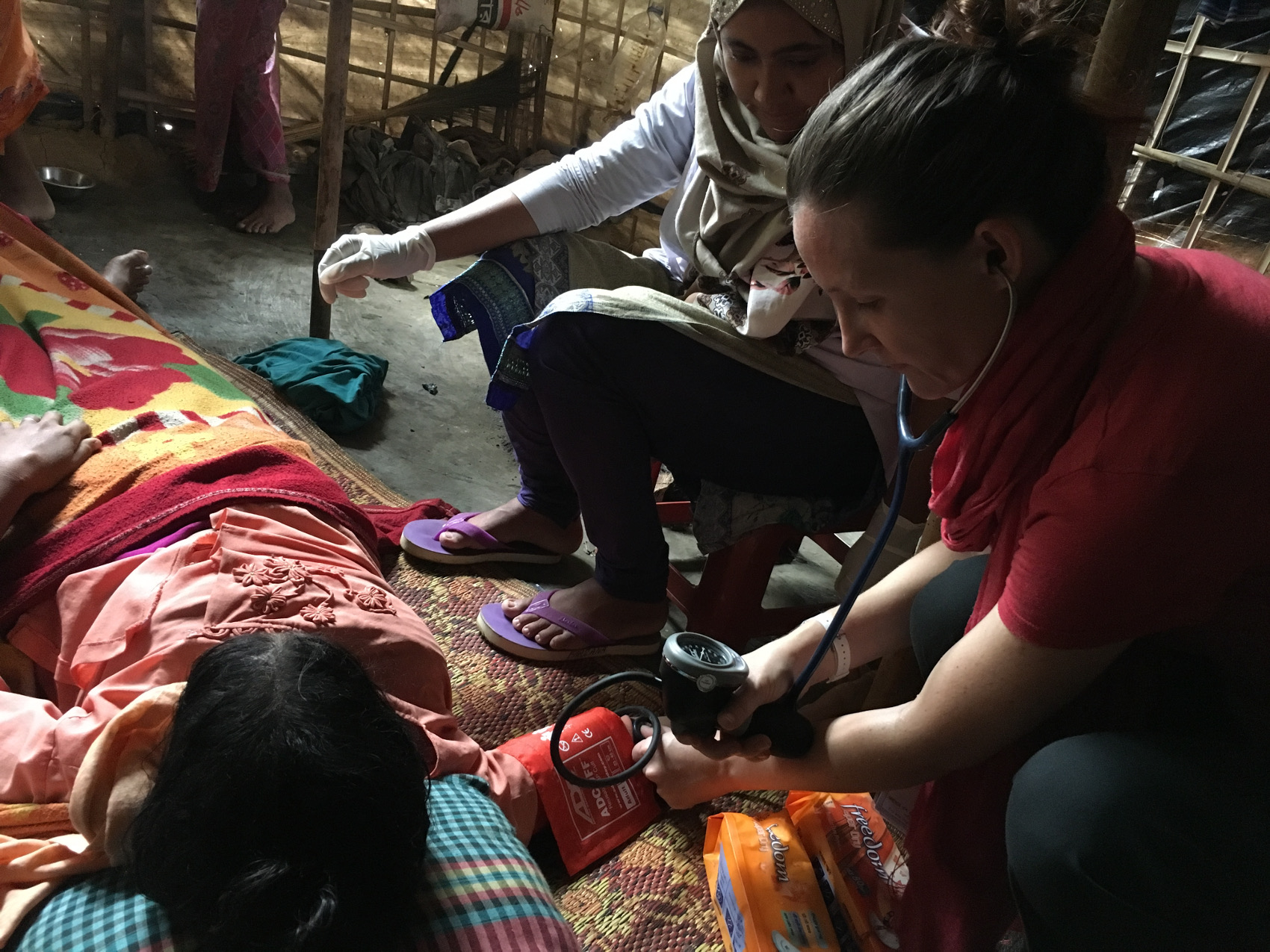 This was her third baby. She was accustomed to the harsh realities of motherhood in a life in poverty. But I wasn’t.

I’m a midwife. I was volunteering at one of the camp clinics when I was called to visit Rojinessa on the morning after her baby was born. I walked about half a mile into the sprawling refugee camps to her tent and stepped inside. The tent was smoky and very dark. I could hardly breathe. I asked one of the Bangladeshi midwives who came with me to open the flap of plastic sheeting that served as a door.

Rojinessa was sitting on the concrete floor on a thin woven mat. The remains of a small fire was inches from her “bed.” She and her husband and her now three children live in a one bedroom tent in the middle of what used to be a rice field. Cows bathe in the small polluted stream that bubbles twelve feet from the structure.

I don’t know what happened during the birth because I wasn’t there. All volunteers are required to leave the camps by 5 pm every day. Most babies are born at night, so even as trained medical personnel, we are cold comfort to the mothers giving birth in the camps. Plus, I don’t speak the Rohingya dialect. And neither, it seems, do many others. The Chittagong dialect of Bangla, I’m told, is somewhat similar, but miscommunications are all too common as we play “telephone” from English to Bangla to Rohingya.

Rojinessa’s blood pressure and pulse were normal. She didn’t have a fever. She complained of weakness, dizziness, fatigue. No kidding. She hadn’t eaten anything but rice in days. Her family could not afford to buy one of the live chickens sold at the pop-up market by the road. We had nothing to give her but a few biscuits and… you guessed it, more rice, with a few lentils mixed in. She had no menstrual pads to catch postpartum bleeding. We were able to bring her some from the clinic.

Her baby was vigorous and hungry. Good signs. She popped him on her breast to nurse like she had done it hundreds of times before. Fantastic.

Pregnant women in Ukhia sometimes walk miles to receive care at one of the women’s-only clinics sprinkled throughout the camps. The clinics themselves are tents. Only a few of them have electricity. Most of them lack the equipment to provide the most basic prenatal and postpartum care. Running a routine lab test is out of the question, much less listening to a fetus on a heart rate monitor or ordering an ultrasound. We have to use our hands, our ears and eyes, and hope for the best.

If there is a true emergency, we can refer a patient to the Red Crescent or MSF hospital tents a few miles down the road, where they have some more capabilities. But there are a number of reasons a woman might not go. Maybe her husband won’t give her permission. Or he can’t give her permission because he’s out working in the fields. Or she doesn't have anyone to watch her other children.

Rohingya mothers grow small babies. They often have trouble producing enough milk for their babies because they don’t have enough food themselves. All of the people in the camps are malnourished. They have been trapped in a state of abject poverty since long before they fled their homes. At the clinic we give each mother a small package of high-calorie cookies and a fist-sized bag of rice with lentils at every visit – which is about once a month. The food is encouragement to come and get care. But it isn’t anywhere near enough.

Rojinessa and her baby survived birth in the camp. Not all do. Hopefully they will continue to survive and her baby boy will grow into one of the many children running and playing everywhere in the camps. They play soccer with empty plastic jugs and make kites out of bamboo sticks and plastic bags. But survival is about all they can hope for. Without a home and without access to education, without the legal right to work, her family, as well as the other hundreds of thousands of families in the camps, continues to face a desolate future.

Firen Jones is a midwife from Texas who has found her home in San Francisco. She spends her time catching babies, running her midwifery practice, and occasionally getting to travel the world and volunteer. You can find her through her website, blog, or on Medium.