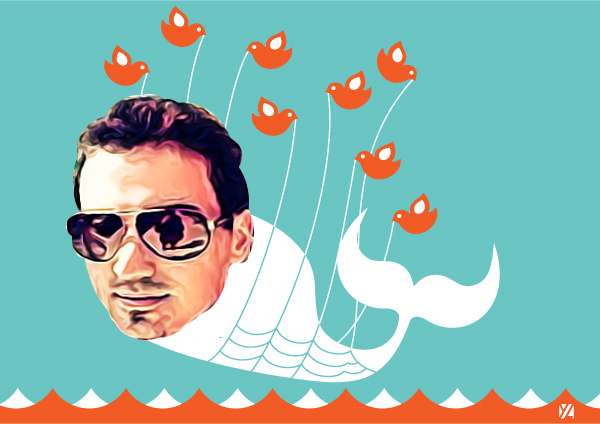 Devumi is a sleazy Twitter-bot farm founded by German Calas, a serial liar who buys wholesale Twitter bots from even scummier bottom-feeders than him, and pays a series of low-waged patsies to direct them to follow people who want to seem more popular and influential than their actual Twitter follower-count suggests.

Calas runs Devumi out of a small office above a Mexican restaurant in West Palm Beach, and is a such a shitty boss that his employees have turned on him, founding lookalike businesses to steal his customers, and, evidently, leaking his embarassing business records to the New York Times.

The Times found a huge number of respectable, well-known people had bought fake followers from Devumi, sometimes coming back dozens of times for more followers. Devumi's wholesale botmasters created followers of varying quality: orders would be filled with a mix of plausible-seeming followers cloned from actual Twitter users, with recompressed profile images, and subtly altered usernames (lower-case l's substituted for i's, etc), and much larger piles of obviously fake followers whose names, bios and other identifying data were just jumbles of random characters or words.

Some of the people the Times contacted for comment on their bot-followers fessed up and described a fascinating mix of envy of other users, desperation (one flunky at a talent agency bought followers for their boss's clients out of fear that they would lose their jobs for failing to generate enough genuine interest in the clients), and foolish vanity. Others attributed the fakes to assistants who had been disciplined or fired. Still others told embarrassing lies about having been fleetingly curious about "how it worked" long ago, not knowing that the Times had Devumi's business records and could see that they had made a string of purchases, including very recent ones.

Equally interesting are the stories of the real people whose identities were stolen by the bot-farmers, often when they were teenagers, and whose doppelgangers had prolifically hawked pornography, shady quack remedies, and the hype of C-list celebs for years, seemingly attributed to these real people, who were all unknowing.

Finally, the Times raises the important question of how Twitter could have missed this, given how obvious these bots are in retrospect (Twitter says it suspends 6.4m bots a week already and has to balance aggressive termination against the risk of accidentally killing the accounts of real users).

While Devumi sells millions of followers directly to celebrities and influencers, its customers also include marketing and public relations agencies, which buy followers for their own customers. Phil Pallen, a brand strategist based in Los Angeles, offers customers “growth & ad campaigns” on social media. At least a dozen times, company records show, Mr. Pallen has paid Devumi to deliver those results. Beginning in 2014, for example, he purchased tens of thousands of followers for Lori Greiner, the inventor and “Shark Tank” co-host.

Mr. Pallen at first denied buying those followers. After The Times contacted Ms. Greiner, Mr. Pallen said he had “experimented” with the company but “stopped using it long ago.” A lawyer for Ms. Greiner said she had asked him to stop after learning of the first purchases.

Marketing consultants sometimes buy followers for themselves, too, in effect purchasing the evidence of their supposed expertise. In 2015, Jeetendr Sehdev, a former adjunct professor at the University of Southern California who calls himself “the world’s leading celebrity branding authority,” began buying hundreds of thousands of fake followers from Devumi.

He did not respond to requests for comment. But in his recent best-selling book, “The Kim Kardashian Principle: Why Shameless Sells,” he had a different explanation for his rising follower count. “My social media following exploded,” Mr. Sehdev claimed, because he had discovered the true secret to celebrity influence: “Authenticity is the key.”