You can eat these drinking straws 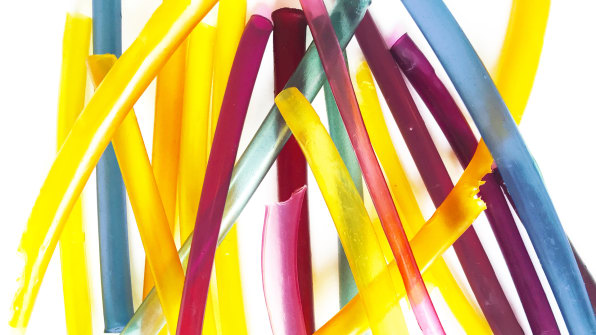 In an effort to make plastic drinking straws extinct, Chelsea Briganti and Leigh Ann Tucker of Loliware have invented the "world’s first edible, hypercompostable, marinedegradable straw." They hope their eco-friendly Lolistraw will replace the "500M plastic straws" that they say are currently being used in the United States every day.

“From our perspective, the way to get our community involved, and the way to get the world excited about this new innovation is to embrace the fun,” says Chelsea Briganti, one of the cofounders of Loliware, a company that began making edible cups, with a fruit leather-like texture, in 2015. The straws are made from a new seaweed-based material that’s more like plastic, but like the cups, can be made with a flavor or with added nutrients; they’re meant to add a little to the experience of having a cocktail or another drink.

“You can imagine drinking your cold-brewed coffee with a vanilla straw or a caramel straw,” Briganti says. “We think that will really increase this movement around plastic-free, because we’re not telling the consumer, hey, you can’t have your straw. We’re providing them a solution to the plastic straw crisis while also giving them a fun experience on top of that. It’s not about the consumer sacrificing anymore, it’s about the consumer having fun and being sustainable at the same time.”

The company plans to target venues where plastic straws are currently used at highest volumes, such as stadiums, fast-casual restaurants, coffee shops, or juice bars. One version will be clear and look like a plastic straw, while others will be colored and flavored.

It “really feels like plastic,” says cofounder Leigh Ann Tucker. “It transforms while you’re using it to where you can actually bite into it afterward and eat it. But when you first pick it up and put it into your drink, it’s going to feel like a plastic straw.”

Drinking straws that are made of pasta

Do we really hate paper straws so much that drinking through pasta seems reasonable? Apparently so! Because here are Italian-made Stroodles. Their selling points: They’re edible, vegan, made for cold drinks, have a shelf life of three years, and don’t get soggy. Just don’t give them to someone with celiac disease — these are wheat! […]

Trump’s merch team sure does know their audience. To mock Liberals, they’re offering a 10-pack of these red “reusable” and “recyclable” plastic straws for $15 on his website. Liberal paper straws don’t work. STAND WITH PRESIDENT TRUMP and buy your pack of recyclable straws today. Stephen Colbert said it best: You can now buy Trump […]

I’m all for stainless steel straws of the sort that we sell in the Boing Boing Store. They’re an environmentally-friendly way to stop yourself from making the idiot-stick move (unless you need to use a straw, due to medical issues, then we’re cool) of using one of the 175 million plastic straws that end up […]