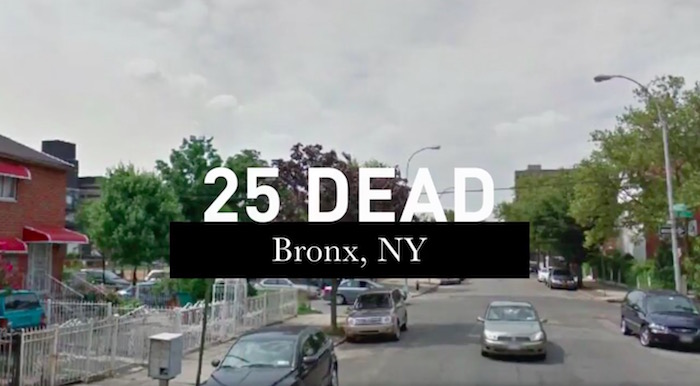 A mass shooting is defined as four or more people shot in one location, but Seattle ad agency Cole & Weber believes that mass shootings happen every single day in America, just not all in one place.

This week marks the 1000th gun death in this country since 2018 began. Tired of the status-quo and lack of action, the agency took a break from regular client work in an attempt to keep this issue top of mind -- not just once, but every single day.

A team worked together to develop technology that uses constantly-updating gun data to automatically create a video every morning that shows the number of people who were killed by guns the day prior, and a first-person street view where the shooting took place. Each death is ticked off with the gut-wrenching sound of a gunshot, one after the next, creating a sobering message that this violence is happening all around us, all the time. The video creation is fully automated, and targeted at influencers, politicians, their aids, and the media via Twitter account: @DailyGunDeaths.

Yesterday, 27 people were killed by guns, including an especially tragic shooting in #Melcroft outside of #Pittsburgh. We need to get our politicians working together to #EndGunViolence. #NRA #Gunsense @AP @WPXI @CNN @CBSPittsburgh pic.twitter.com/9330YH9R8J

The project was started after an employee found out their friend was shot during October’s Vegas shooting. While the friend survived, it motivated the agency to start looking into ways to address the issue.

Knowing that this is a complex problem, the message was to keep people talking about how to enact effective change. To not let the conversation just fade away. In the message accompanying the video, people are asked to share concerns with politicians, local and national, letting them know that they need to start working to find a solution.

While the account’s current following leans towards gun-control advocates, the agency says they want gun rights supporters as well. “It’s all about getting people to stop circulating their go-to talking points, and start having a real dialogue to address this issue.”