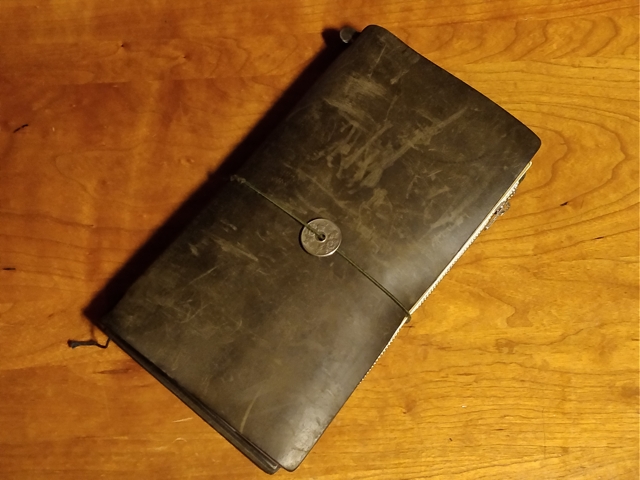 I traveled to Japan to buy a notebook.

As a tech journalist and hardware reviewer, my primary function is to tell you whether or not the products you may be thinking of buying are, in a word, shit. It’s not typically a job that requires I leave my home. Hardware companies or my employers have products shipped out to me. I play with them for a few weeks, or less. Then, most of the time, I ship the stuff back to make room for more stuff. Occasionally, I’m offered the opportunity to travel for work: a cellphone company might be showing off a new version of something they released last year. Sometimes, a well known company wants to give me a peek behind the curtain to see how they build the things that I'll wind up calling shit somewhere down the road. Such an instance happened this past August. I was asked by a well-known peddler of audio equipment if I’d be willing to travel to Japan to take a look at something new they’d been cooking up. I agreed, but warned that if they didn’t show me anything compelling while I visited their manufacturing facility, I wouldn’t be writing a story. They agreed to the terms.

A few weeks and a long flight in coach later, I was in Japan. I’d been sent an itinerary a week before I was due to fly. It detailed a stacked week of factory tours, site seeing and cultural events. In the middle of all of the goings on, was a single day where I could do whatever I damn well pleased while I was in Tokyo. If you haven’t been, it's sprawling metropolis that no one stands a chance in hell of fully experiencing in a single trip. So I didn’t even try.

My hotel overlooked Shibuya Crossing, so I crossed out seeing it by wandering the area on the evening before my day off. The next morning, I wandered the Imperial Palace grounds with friends and then headed down the block to visit the National Museum of Modern Art. All of it was a feint to get me to a nearby subway line. My mission was to ride 30 minutes, to Meguro. I was venturing out in search of the Midori Traveler's Factory.

The Midori Traveler’s Notebook, you see, is my favorite writing tool out of everything I’ve ever used. For the uninitiated, the Travelers notebook comes in two different sizes: one about the size of a passport, and the other, well, it’s larger. They’re not much to look at. When bought new, a Traveler’s notebook comes with a pliable leather cover and a single blank notebook inside. The book is held in place with a string. An elastic keeps the notebook sealed when not in use. What makes them so special to me is that they’re designed to be modified and added to in a gazillion different ways. With the right inserts, notebooks and other add-ons, a Traveler's Notebook becomes an invaluable tool. They’re hard to buy in North America—most of the time aficionados of the brand are forced to order components to use with their notebook, online, at highly inflated prices. I wanted to go to the source and build my own. It’d be a memory of my time in Japan that I would be able to use and enjoy every day.

Provided I could find the factory outlet.

Getting off the subway in Meguro, I was certain that I was in the wrong place. There were stores, but nothing that suggested warehousing or a factory where the notebooks, or at least some of their components could be made. Walking in the direction suggested by Google Maps, I became more certain that I must be in the wrong place: the small shops and restaurants had given way to tight, winding residential backstreets, wide enough for a single car to pass through. Children played in the lane. I stopped to pet a dog. I came to the point where the factory store was meant to be, according to the directions on my phone. More houses. Frustrated, I walked on another block and there it was:

It was smaller than I would have imagined, but real enough that I felt like my day off in the city had been well spent. Walking into the store, I found wall-to-wall stationary, and a few shoppers that seemed surprised to see me.

I wandered the store’s aisle, collecting bits and pieces, building the notebook that I had always wanted. I happened upon a special edition green leather cover, that was only made in 2017, making the book all the more special to me. By the time I was done, I dropped $200 in the shop—enough to ensure that I’d not be running out of refills to write on for at least a year. I tried to explain to my friends later that evening why I was so excited to have found the place, when there was so much to see and do in the city. It was hopeless.

Passions, especially for small things, can be difficult to share. I never did find a story to write, but I'll always have my notebook.

A video from Mako, the human guardian of this otter, Sakura, and a cat named Mochi.