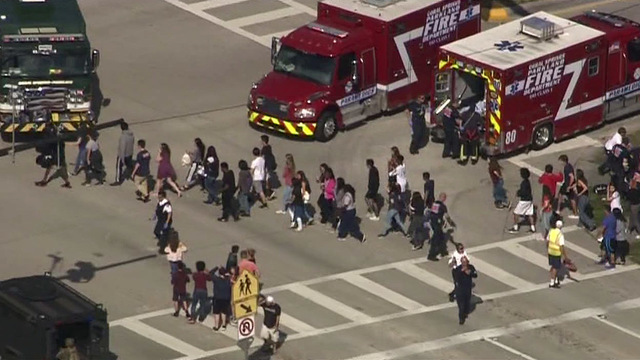 Another mass shooting took place in America today at a high school in Parkland, Broward County, Florida. Several hours after 911 calls first came in, authorities are now reporting that at least 20 injured, 1 dead. A suspect has been taken into custody, alive, according to reports. This is a developing story.

The male shooter was identified as Nicolas Cruz, said a U.S. official briefed on the investigation. The official spoke on condition of anonymity because he was not authorized to discuss the information publicly. Previously, Broward County Sheriff Scott Israel had said the shooter was a former student. He said the shooter was outside and inside the school at points during the attack, and taken into custody “without incident” about an hour after he left the school. Israel said police were waiting for the SWAT team to give them the all-clear so that they could go inside the school.

JUST IN (warning, disturbing video): Cell phone video inside the school as shots were going off at Marjory Stoneman Douglas High https://t.co/wHWo6XjccX pic.twitter.com/3ovf5LhzBs

My little brother just sent me this video of the swat team evacuating his classroom at stoneman douglas. So scary but glad he's safe. @nbc6 @CBSMiami @NBCNews @wsvn @CBSNews pic.twitter.com/XNTtra221q

The shooter who was at large in the wake of the incident at a Florida high school is now in custody, the Broward County Sheriff's office says https://t.co/gZnEQRxQ0y pic.twitter.com/8IDK5B2gW7

Fuck guns. Fuck everyone that uses them for violence. FUCK this. I hate living in fear and PRAYING my friends make it home alive. NO WAY is that okay.

Images on live local TV news coverage showed children being marched out of the school, in single file lines, with snipers and SWAT vehicles surrounding the area with a wide perimeter. Some children were marched out with hands on the shoulders of the student in front of them, behind an armed agent.

Police are working an active shooter scene, and ask that if you are in touch with your student you ask that they remain calm and barricaded until police come to their room, this is for everyone's safety. Do NOT call our 911 or non-emergency number unless it is an emergency.

Avoid the area of Stoneman Douglas HS. #BSO is currently working a developing incident regarding a report of active shooter.

Local news reports reflect the quickly-changing nature of an active mass shooting, but at least 20 people, adults or children or both, were immediately reported to have been shot and injured.

#BREAKING BSO will be on scene to respond to media inquires. https://t.co/Bc3TVUcuHF

AVOID THE AREA - Do not attempt to get to the school this perimeter is LOCKED down. https://t.co/sNtQqZYojL

#BREAKING: BSO confirms there has been a shooting at Marjory Stoneman Douglas High School in Parkland. The school is currently on lockdown.

Margate Fire Rescue has deemed this a mass causality incident, which means at least 20 people have been injured.

The Broward Sheriff’s Office sent out a tweet Wednesday, just before 3 p.m., calling this an “active shooter” situation.

The shooter was described as wearing a black hat, a maroon or burgundy colored shirt and black pants. He was last seen on the west side of a three story building on campus.

As 7 Skyforce arrived on the scene, one person was seen being wheeled into a Coral Springs Fire Rescue ambulance, but he was on his phone.

However, soon after, at least four other people were spotted surrounded by fire rescuers, at the corner of an intersection at the north part of the school

The extent of injuries remain unknown.

Several students could be seen walking and running along the road, past those injured.

Coral Springs Police are asking people to avoid the area, as a perimeter is in place, which extends to a nearby Walmart, and the evacuation continues.

This is where I went to high school. I now study social media use during times of disaster. I cannot explain how awful, surreal, and infuriating this is to me.

AVOID AREA OF DOUGLAS HS for ACTIVE POLICE SCENE. Do not call 911 unless an emergency. Nothing further.

#BSO is working a developing incident regarding a report of active shooter located at 5901 Pine Island Rd, Parkland. Here's what we know so far: deputies are responding to reports of a shooting at Stoneman Douglas High. There are reports of victims. PIO will be on scene 3:15pm.

All roads leed to a political upheaval where the USA is not held hostage and slaughtered by those who see profits as the only good in the universe - trump must go - breaking gun lobby must be on any progressive platform https://t.co/YyxbePuqIo

Garry Wills' chilling "Our Moloch" is still the best piece on America's pathological worship of a god whose bloodlust can never be satisfied. Thanks to @xeni for the reminder. https://t.co/tTFKEcfwKR