When Fonzie and the Happy Days gang time traveled 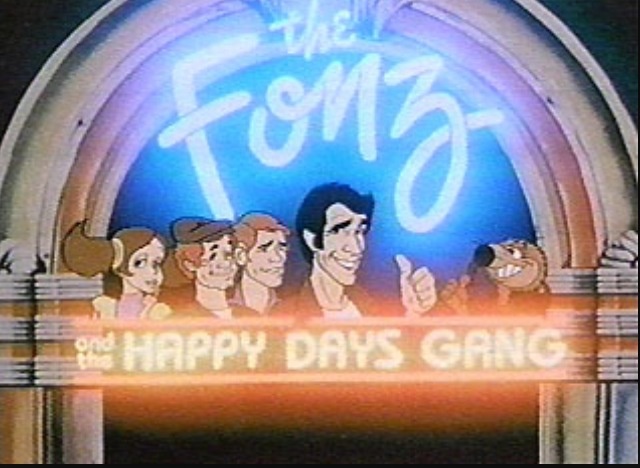 If you're a child of the seventies, you'll probably remember that while the sitcom Happy Days aired from 1974 to 1984, it was set in Milwaukee in the late fifties.

Ok, so in 1980, an animated spin-off series called The Fonz and the Happy Days Gang hit the Saturday morning cartoon circuit, lasting just two years. In those two seasons, they meet a "future chick" named Cupcake and are accidentally hurled through time and space in a janky spaceship with Mr. Cool, a talking dog. This quasi-educational show (which has Wolfman Jack as its narrator) chronicles their journey trying to get back to 1957, but first they jump to significant historical time and places, like the Salem Witch Trials.

So, it's a cartoon, made for early-eighties kids, of fifties youth bouncing around in time trying to get back to 1957. Sure... why not?.

If you're wondering, this cartoon happened two years after Robin Williams landed a small role as Mork on the live-action Happy Days (which eventually turned into the spin-off, Mork & Mindy) and just three years after the Fonz jumped the shark.