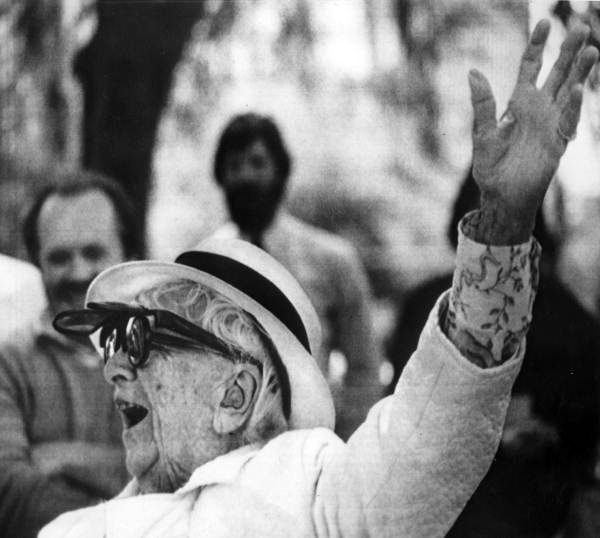 Turns out, Marjory Douglas was a bit of a badass in her own right, a writer of some repute who became a relentless advocate for preserving the Florida everglades. She was also an outspoken suffragist and civil rights advocate. She died in 1998 at the age of 108.

These kids didn't choose this tragedy, but it sounds like they have a worthy predecessor and inspiring icon in their school's colorful namesake. Here's a piece from the Chicago Tribune which offers a thumbnail bio of Ms. Douglas:

But before Marjory Stoneman Douglas was a school, before the school was the latest symbol of the country’s gun violence and woefully weak gun laws, Douglas was a person, a fighter, a legend.

She was a writer and editor there [Miami Herald] for a while, then moved on to writing short stories for such prestigious magazines as Harper’s and The Saturday Evening Post. Money from those jobs helped her finance the cottage on a shady street in the Coconut Grove neighborhood.

She had battled governments, developers, engineers, sugar cane industrialists and the apathy of normal people. She had pushed so hard and for so long that the state had finally committed to preserving one of the world’s great wetlands. We have her to thank for Everglades National Park.

Had she ever been discouraged, I asked?

“What does it matter if I’ve been discouraged or encouraged over the years?” she said, brusquely. “This thing’s got to be done. It’s not a question of how I feel from moment to moment.”

One Florida environmentalist described her to me as “that tiny, slim, perfectly dressed, utterly ferocious grande dame who can make a redneck shake in his boots.”

“When Marjory bites you,” he added, “you bleed.”

[H/t to my short-suffering agent, Laurie Fox, for posting the Tribune article on Facebook]

[Photo: "Photographed at the naming of the Department of Natural Resources administration building in her honor. Douglas, an environmental activist and popular author, was inducted into the Women's Hall of Fame in 1986 and awarded the Presidential Medal of Honor by President Clinton in 1993 for her conservation efforts." Via Wikicommons.]