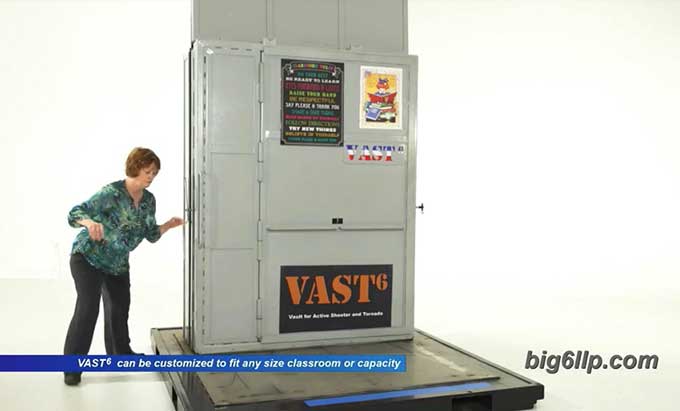 If the GOP and NRA have their way, frequent mass murders of students in classrooms will continue to be the new normal. A South Carolina company called Big 6 has developed an expandable vault that can be installed in classrooms as a place for children (or, as some conservatives call them, "crisis actors") to hide when an active shooter tries to kill them.

When the VAST6 is folded way, it is only 28" thick and takes up limited floor space. The VAST6 unit itself can be scaled to fit just about any class size to make sure there is room for everyone to feel safe and secure.

What does that mean? The VAST6 stops .308 ball/7.62 mm rifle lead core full metal copper jacket, military ball, 150 grain at 2,750 feet per second. To put in simply, the VAST6 will stop bullets from pistols, shotguns and semi-automatic rifles such as the AK-47, AR-15 and AR-10. The ballistic material exceeds the protection elements comparable steel. The ballistic panels of the VAST6 will absorb the bullet which will prevent ricochets while at the same time will not spall (flakes of a material that are broken off of the wall when a bullet hits that wall from the other side. This causes that material to become projectiles themselves) on the inside walls.

Edward Gorey's "Gashlycrumb Tinies" is a much-beloved, macabre illustrated children's book that is a favorite of remixers of all kinds; but Mad Magazine's Ghastlygun Tinies dials up the "trenchant" knob to 11.