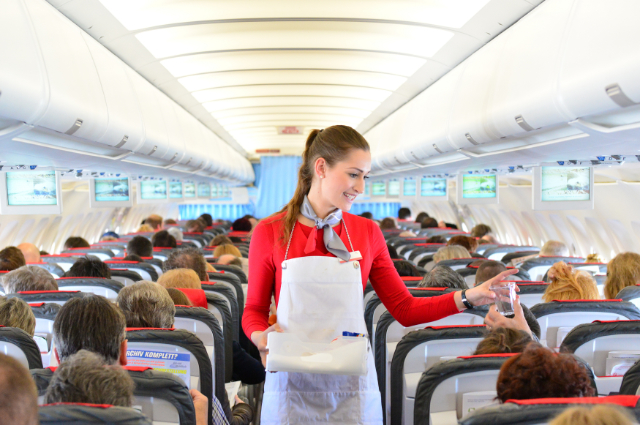 Traveling by air is thirsty work.

When you're flying, the cold air sucked into an airplane at 30,000 feet keeps everyone alive, but it doesn't have a whole lot of moisture in it. An hour of breathing it in leaves most people's mouths feeling as dry as a popcorn fart. To help sooth our parched mouths, flight attendants dole out free water and soft drinks. According to the Huffington Post, if you want to start drinking as soon as humanly possible, don't order a diet soda: of all the drinks offered as part on an aircraft, they're the most difficult to pour.

Diet sodas, and especially Diet Coke, are the bane of flight attendants because they're so much more fizzy than other drinks that it takes a longer time to pour, especially over ice. A passenger request for a glass of Diet Coke can slow down in-flight service to a crawl as the fizzy drink foams up fast and settles down slow, forcing the attendant pouring it to take their time to fill up a glass:

“[Diet Coke is] the most annoying beverage a flight attendant can pour for a passenger in flight, because in the time it takes us to fill one cup, we could have served an entire row of passengers,” Poole wrote. “I’ve actually had nightmares about frantically trying to finish a never ending Diet Coke beverage service before landing.”

There is an upside to the slow pour of diet sodas on an airplane. As flight attendants hate having to deal with diet sodas so much, there's an excellent chance that, were you to ask for a whole can of the pop, instead of just a glass, they'd happily give it to you.