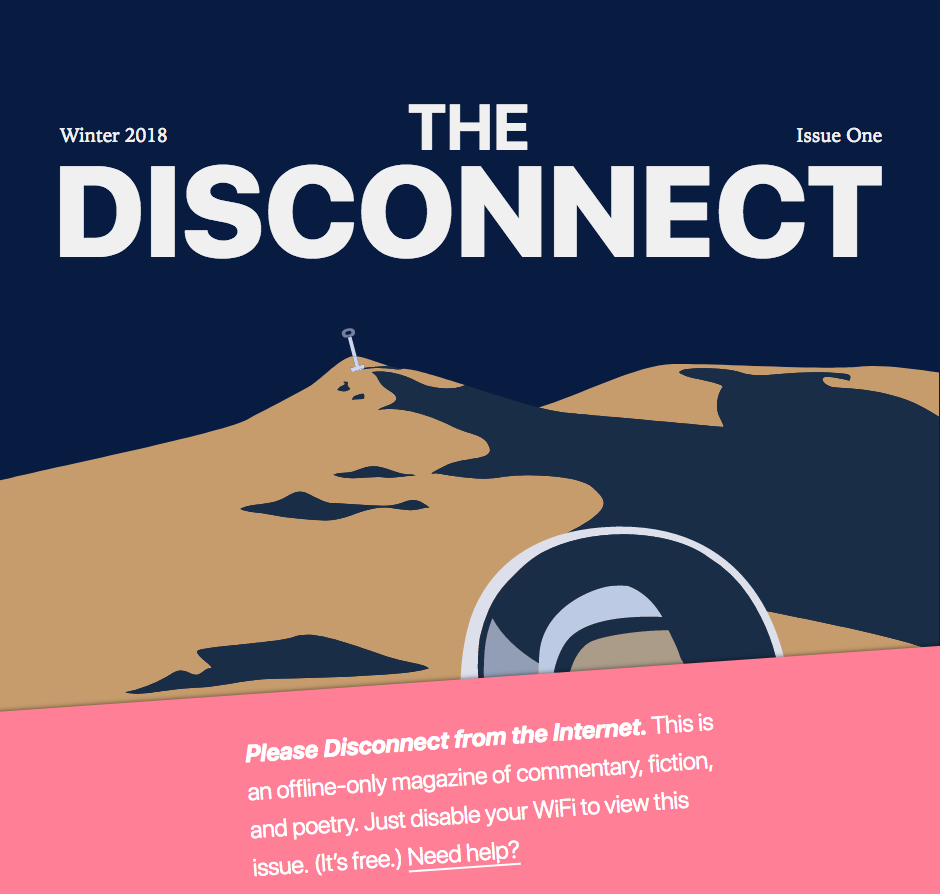 The Disconnect is a literary magazine published on the web with a fun wrinkle: You can only read it if your wifi is off.

You can load the magazine by going to its URL, but once you're there, it displays a message telling you "Please Disconnect from the Internet".

I duly turned off my wifi, started reading the first issue, and got to the note from the editor and founder, Chris Bolin:

This magazine started with a simple thought experiment: what if a piece of the internet made you leave the rest behind?

We created The Disconnect to embrace positive aspects of the internet—ease of dissemination and access—while pushing against some of its nefarious features, like ubiquitous distractions.

The theme of this issue is straightforward: humans and our technology. Every piece in this issue describes an encounter with technology, whether it’s intentional or inconsequential, constructive or devastating. You’ll find a poem about a conflicted hunger for silence, a tale of monetizing the dead, and an exposition of the future of digital divides.

This is not a Luddite rallying cry against modernity. Technology is ingrained in our lives for good and for ill. This is nothing new: humans have altered their reality with technology for millennia, from spoken language to the written word, from agriculture to electricity. We believe that the way to a better life is forward, not backwards. Let’s thoughtfully critique our world, not naively eschew it.

It's a very fun concept! It's part of a whole pile of recent design experiments that tweak our relationship to the always-on interwebs and the casinofied psychologies of social media, ranging from Rob's txt.fyi (which I wrote about here) to Ben Grosser's experiments in "demetricating" Facebook and Twitter, or tools for removing retweets by Andre Torrez and Robin Sloan.

As for the writing itself in The Disconnect, I've only started reading the first issue, but I've really enjoyed the opening piece, "Rescue" -- a bleak and moving sci-fi short story by Brian Mihok.

Cellular carriers’ competing claims as to what constitutes 4G (fourth-generation) cellular data networks got me to thinking about how speed is only one part of the story about why allegedly faster networks are being built. I’ve been writing about Wi-Fi since 2000, and that informs my thinking, because Wi-Fi has matured to a point where […]