Lord Birthday's How to Appear Normal at Social Events 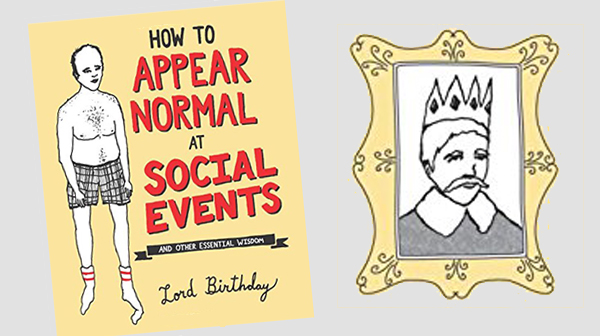 Who is Lord Birthday?

He’s a brilliant cartoonist who has a new book that just came out, How to Appear Normal at Social Events.

But it’s more complicated than that.

His cartoons started on an Instagram account in 2015, and as their popularity grew to become a sensation, drawing a following that’s now up to 184k, his real identity remained a closely guarded secret. No one knew who Lord Birthday was except he and his wife.

The cartoons themselves reflected this mystery. They are hilarious and fascinating, but cryptic and absurd, with a cartooning style that is reminiscent of outsider art. They seem weird and oddly authentic, and you could imagine their creator as someone living on society’s fringes.

Then in 2017, with a book deal done and publication looming, Lord Birthday very reluctantly revealed himself on a podcast, Invisibilia. The link is here, and the segment on Lord Birthday starts at 20:00.

He’s Chad Murphy, a business school professor at Oregon State University, described as “the squarest man on Earth,” raised a Mormon, and he talks about the “birth” of Lord Birthday as though it was something that was visited upon him very suddenly. As though another personality suddenly appeared to him, and within moments he was drawing these strange pictures and making absurd word combinations.

He’s now apparently coming to terms with the secret coming out. As a fellow pseudonymous cartoonist whose personality seemed to be split in two, I can relate.

Not only does he have to incorporate the existence of Lord Birthday into his professional life, but also into his family. His father is former All Star major league baseball player (and should-be Hall of Famer, but that’s another story) Dale Murphy.

If there was any doubt how Chad’s two-time MVP father would react to the revelation of this eccentric, artistic side of his son (and I have no idea if there was), it was erased with this touching endorsement Dale made on Twitter:

These cartoons are wonderful and weird, and I’d recommend this book, and not in the least because of this fascinating backstory.