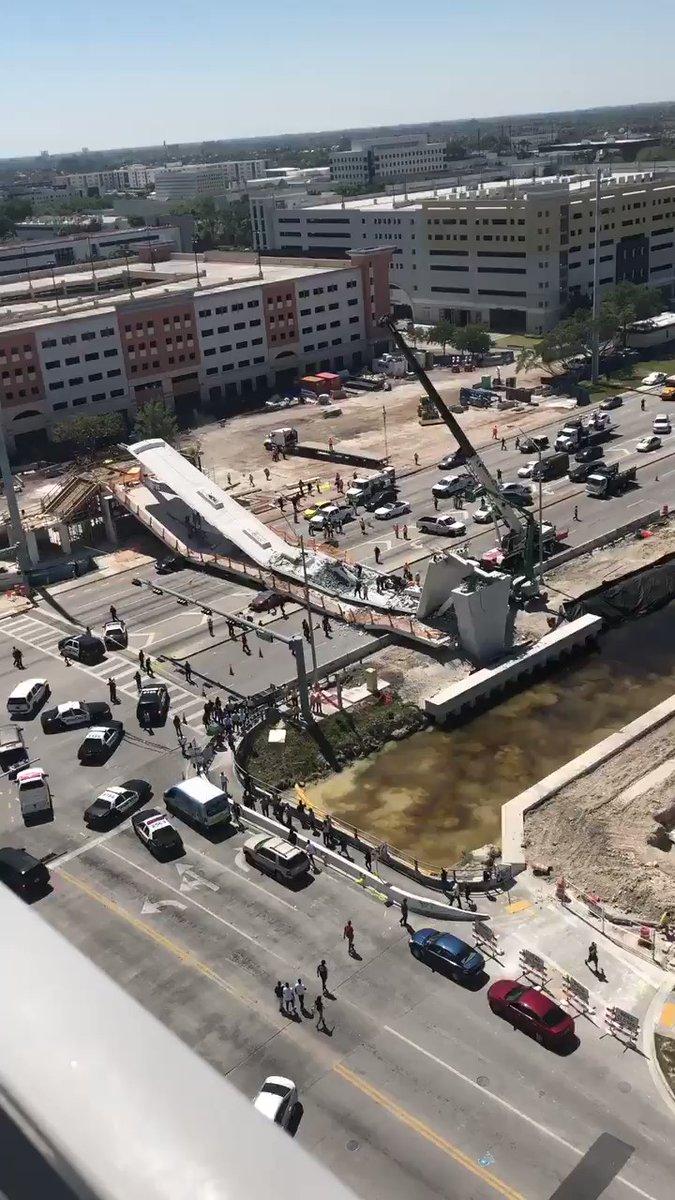 Several people died when a 950-ton pedestrian bridge collapsed over a roadway near Florida International University (FIU). Live video footage of the incident shows 5 or 6 cars flattened beneath, pinned down by enormous concrete slabs. It is hard to imagine any of the people inside having survived, but some have.

An 'accelerated' construction method is reported to have been used, and is the focus of great speculation.

It was scheduled to open to the public in early 2019. Some 55,000 students attend FIU, and the community hoped the bridge would reduce injuries and deaths that were common at this busy roadway.

Officials told reporters within minutes of the disaster that multiple deaths were apparent. The number of dead and injured is not yet known.

The area was less crowded with cars and pedestrians than it might have been, because classes at FIU were out for Spring Break.

#MDFRUpdate: #MDFRTRT is currently securing the structure while continuing to search for patients.

Police telling me there are “mass casualties” after bridge at FIU collapses to the ground. @MiamiHerald

Construction workers are telling me it’s an “engineering failure.” They say casualties haven’t been confirmed because nobody has been able to get beneath the bridge to find out. @MiamiHerald pic.twitter.com/ywMRhjAUQa

This is the scene at @FIU. First responders are trying to see if drivers are responsive. @MiamiHerald pic.twitter.com/cLuI54M1Ep

This is the scene at @FIU after bridge collapse. Police moving media away “just in case the rest falls down.” @MiamiHerald pic.twitter.com/wqurS5IZTQ

Police calling doctors and nurses to the scene. @MiamiHerald pic.twitter.com/lgvkNTdQSJ

This Miami bridge collapse is horrific. These cars have been completely flattened with drivers inside. pic.twitter.com/mZLkGP3DxF

The bridge was many years in the making.

The 174 foot bridge, scheduled to open to the public in early 2019, crossed Southwest 8th Street near 109th Avenue and was built with the purpose of allowing students living across the busy roadway to cross safely.

Ada Collazo rushed from Hialeah after she found out her daughter’s car was crushed. She veas visiting campus for a nursing meeting. Thankfully she survived, she says. @MiamiHerald @elnuevoherald pic.twitter.com/FOJu1bUvGd

I wrote about the bridge just over the weekend. They closed roads to prop it up. How quickly it came down. @MiamiHerald pic.twitter.com/JenrCJdS0N

Construction of the FIU bridge began in the Spring of 2017. It was called an "instant bridge." But is now "not the time" to talk about the dangers of deregulation? https://t.co/D5KXBDOI9h

Family and friends of the injured or killed are being gathered inside an unknown classroom at @FIU where they’ll meet with police chaplains. @MiamiHerald pic.twitter.com/AO3Cg3rXDu