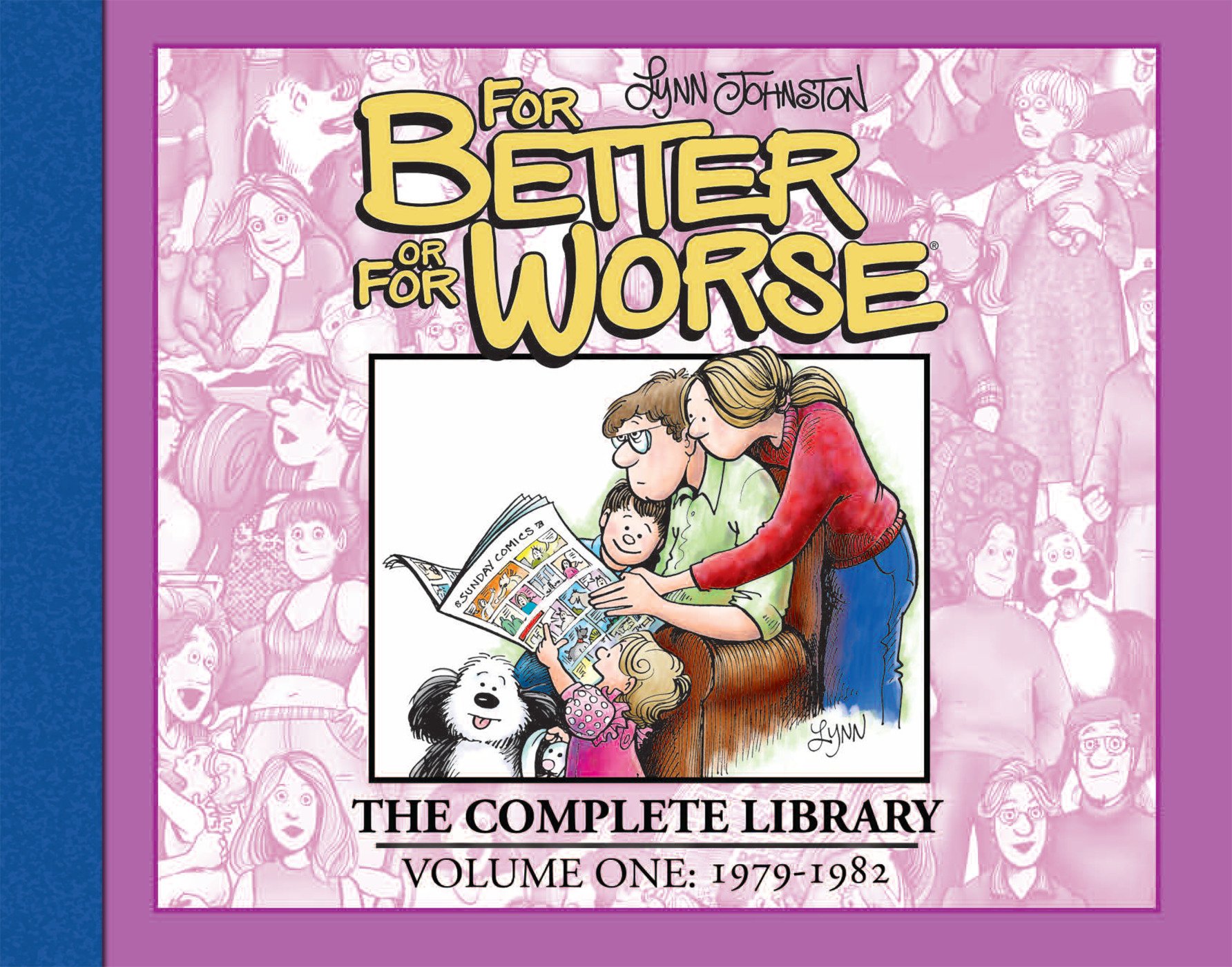 In honor of the Library of American Comics' publication of For Better or For Worse: The Complete Library, Vol. 1 (Volume 2 is out this summer), we are delighted to publish this essay by Lynn Johnston, contemplating the nature of writing a serial for decades and how she might approach her life's work today.

When I was barely 20 years old, I got married. My husband and I settled into an old apartment in Vancouver, near English Bay. He was working for the CBC as a cameraman and I was an ink and paint artist for Canawest Films. I wanted to be an animator and was learning the industry from the ground up. We did commercials, public service announcements and piece work for Hanna Barbera. I was one of 16 young women hired to hand colour acetate cells. Having signed an agreement to not join a union, we took shifts and worked around the clock for $1.50 an hour. It was hard work, but I learned quickly and I realized that an animator makes other people's drawings, other people's characters, other people's dreams come to life. With no children to occupy my time at home, I decided to try my hand at creating stories and characters of my own. I have always been more at home with realistic scenarios, so I decided to tell short stories about my childhood. Within a few weeks, I had a few tall tales worked out and perhaps, 15 coloured drawings. I wondered if they might even be published some day. It was 1968 and I was creating a graphic novel.

If I was starting out today, knowing what I do about the internet vs syndicated comic art, I think I would choose to become a graphic novelist. Having said that, I need to add that the very thought of writing a novel and illustrating it is daunting. Even as a young and fairly driven cartoonist, I was as lazy as anyone else! If I had a really good idea, I was immediately inspired to get it on paper, but a long, focused page-after-page production would have had its serious ups and downs. At the moment, I am working with a friend on a graphic novel of his. I'm his editor and he is doing all the work. Even so, it's such a long process that we have our times of great progress followed by times of exhaustion and self doubt! The project continues, but it's far from an easy task. A graphic novel is serious work. I admire all the artists who stick with it and see the sweet success of publication.

A syndicated comic strip, though hard work and long hours, can be like a graphic novel, I think. Mine certainly became a chronicle of family life – a story that had a beginning a middle and an end. Since it was produced over 30 years - a day at a time, the process was certainly different. Strict deadlines and censorship played a significant role in the way story lines evolved. Timing was important, too. In a graphic novel, the reader can skip forward or back, read the volume entirely or savour it one piece at a time. A syndicated comic strip has to hit a target every day with a gag or a philosophical point; something to make it worth a reader's time. It takes less than 30 seconds for a reader to suck in your message, which has to be good enough to warrant another review the next day. If the reader misses Monday's strip, the strip he reads on Wednesday has to engage and also continue the story line if there is one. There is a steady dance between funny and poignant, serious and satirical. In order to create something that held MY interest, I kept juggling comedy with reality and serious stuff with every day happenings. There was a kind of science to it. I thought a great deal about how dialogue was written. It had to flow like poetry. I thought long and hard about when to stop a serious story and how to start another. Sunday pages were a refuge in that I could make up something fanciful or goofy or honest without having to fit it into a series running on the daily page. Some of my best work was done on the Sunday pages because I had the space to time the action and to craft the commentary. The name "For Better or for Worse" was an honest title; an appraisal of the work I did for so long.

Andrews and McMeel published “For Better or for Worse” in an annual collection for many years. As a collection, the strip became easier to digest; easier to remember. You could read a year's work in one sitting. I was proud of these books and even more so when readers began to collect them and then pass them on to their kids. The first collections were incomplete, as I had removed strips I didn't think were my best work. A&M gave me that privilege and I edited my books rather savagely. Now, almost 10 years after I retired, IDW books has begun to publish my syndicated work as it originally ran, warts and all! This is a beautiful product. Large, hard cover books, (9 eventually), will be out there on library shelves and will contain everything I ever did for Universal Press Syndicate. This is an honour and a gift. There will be thousands of drawings in these books, representing many more thousands of hours of thought and scrutiny. These volumes will be in their entirety an enormous graphic novel!

I do think of “For Better or for Worse” as a huge graphic novel, but ironically, the thought of writing and drawing a graphic novel in the modern sense stops me cold. I think of the story arc, the writing and the drawing, the criticism, the editing, the publishing and marketing and it makes me tired. I look at the aisles of graphic novels in the bookstores and all of the work available on the internet and I marvel at the talent. But I also admire the intense perseverance that goes into completing every one of these books. I might have produced a giant graphic novel, but I did it one day at a time. This is a new age with new ways of doing everything. It's a new world, but hard work is still hard work!  Despite the frustration of making ends meet, despite the time it takes and the competition we face, cartoonists (who are also writers, performers and comedians) will always produce, create and be "out there" because it's something we are driven to do. Graphic novel or comic strip, we open our veins. We keep few secrets. If success happens to come, that's wonderful, but most of us would work for free. With this in mind, comic art continues to be one of the richest of art-forms. It's also one of the oldest. Internet or Gutenburg's Press, we're driven to draw and the reward is in knowing that there will be silent but sincere applause.