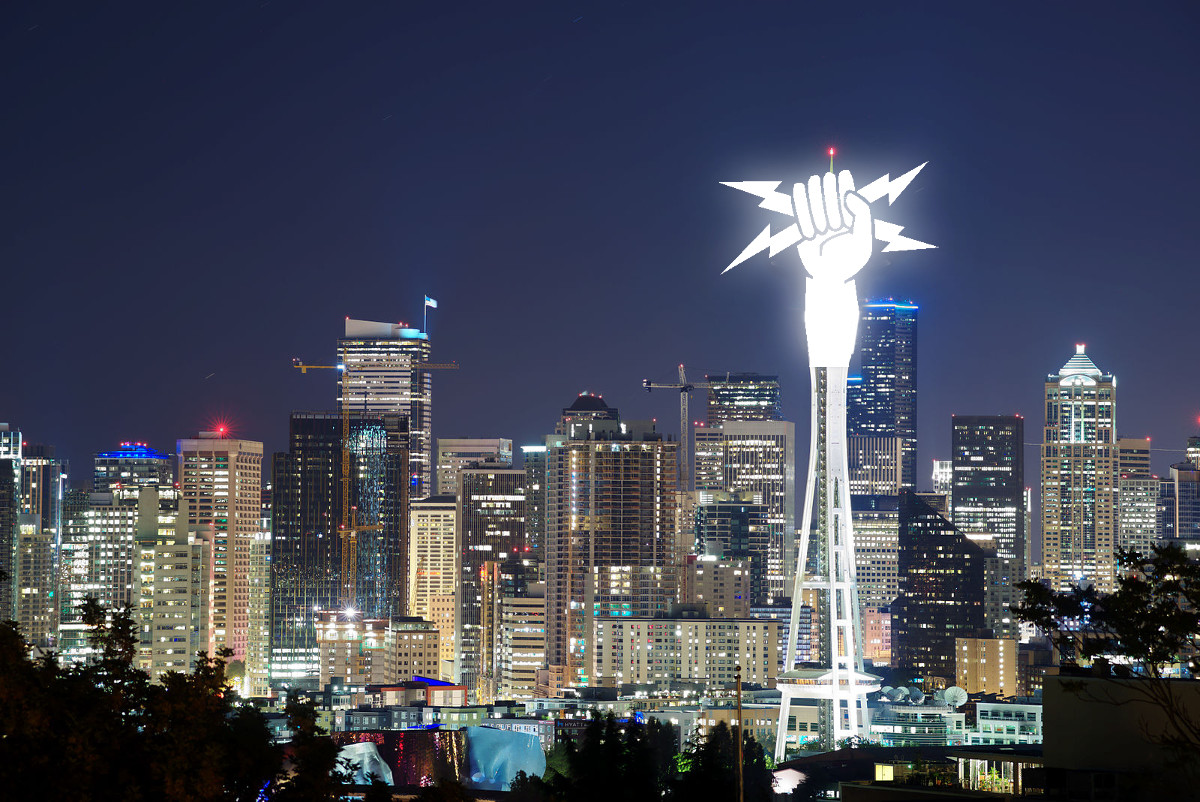 Washington State was the first to pass a true Net Neutrality law that restored all the public protections the FCC withdrew when it killed Net Neutrality late last year; the move is symbolically awesome but legally fraught, seeking to redefine the line where the FCC's authority stops and the states' authorities start.

Late in the second Obama administration, a progressive FCC started to show some backbone, enacting not just a modest Net Neutrality rule, but also a rule banning states from limiting municipal networks. Big Telco mobilized its lobbyists, working with state lawmakers to successfully sue the FCC over exceeding its authority in telling states how they could regulate their networks.

At the time, Net Neutrality advocates decried this "states' rights" argument, insisting that the FCC had the authority over the nation's telcoms policy.

Now that the FCC has been colonized by Ajit Pai, a former Verizon executive who is handing out regulatory favors in bulk to his former employer, many of the same pro-Net Neutrality advocates are arguing that states have the right to make their own telcoms policy, while the Republicans, corporate water-carriers and telcoms lobbyists who were trumpeting states' rights against Obama's FCC are now certain that the states have no business frustrating the will of the Trump FCC.

Ars Technica spoke with State Rep. Drew Hansen (D-Bainbridge Island), a trial lawyer who sponsored Washington's Net Neutrality law, about his legal rationale on the matter of state and federal telcoms authority. Hansen has an interesting theory: the FCC is required to oversee the orderly operations of the nation's telcoms infrastructure, and in failing to do so, they have abandoned their authority. They can impose their rules overtop of state rules, but their can't impose no rules over state rules.

It's a plausible-sounding argument that I lack the expertise to evaluate. I'm mindful, too, that my optimism over this approach may be wishful thinking, as I live in California, a state that is trying to follow Washington's lead with similar legislation. Also, I note that my EFF colleague Ernesto Falcon, who is our lead legislative counsel, is skeptical: "Falcon thinks the dormant commerce clause will make state net neutrality laws vulnerable to legal attack unless states use indirect regulatory approaches, such as requiring recipients of state broadband subsidies or state contracts to abide by net neutrality."

The telcos say that they can't practically manage a patchwork of 50 or more local telcoms rules, though that is wildly overstated as a purely technical matter. Politically, it's something of a nonstarter: if the telcos didn't want the states to create local rules, they shouldn't have worked so hard to erase any semblance of a national rule.

One thing I like about Hansen's argument: it seems to address the major concern regarding any kind of states' rights precedent, which is that such a precedent would allow captured states with Republican legislatures to opt out of good FCC rules. By insisting that the states only have the power to regulate their telcoms in the absence of FCC rules, Hansen is daring the FCC to have a real rulemaking, based on evidence, which produces some kind of meaningful regulation. So long as Pai continues to insist on the ideological and industrially attractive principle of having a no-regulation free-for-all, the states get to override him.

One state requiring net neutrality wouldn't conflict with other state laws, Hansen also argued. There aren't any state laws that require ISPs to block or throttle lawful Internet traffic, so the Washington net neutrality law isn't prohibiting anything that other states require, he said.

Washington's legislature held several hearings on the net neutrality legislation before voting it through. "The industry was opposed and the public was in favor," Hansen said. "And you know, we do still live in a democracy, so that still matters."

ISPs and broadband lobby groups have complained that they don't want a "patchwork" of 50 state laws. But ISPs abide by different consumer protection laws in different states already, Hansen noted.

"If ISPs are so concerned about a patchwork of state laws that possibly conflict, perhaps they should not have lobbied for the FCC to eliminate national laws," he said.