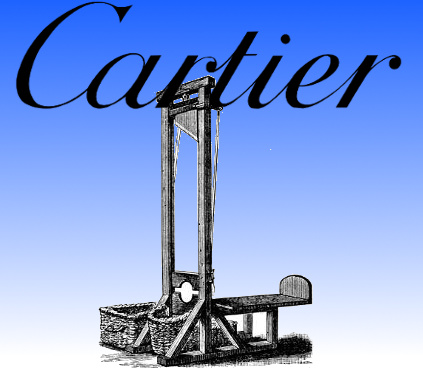 Tobacco heir Johann Rupert is worth $7.5B; he's head of Cartier, Montblanc, Chloe and other luxury goods labels, having returned to the helm of his Richemont holding company after a year-long fly-fishing sabbatical; in a speech to the Financial Times Business of Luxury Summit in Monaco he revealed that he no longer sleeps at night because he is worried that "envy, hatred and social warfare" will destabilize the world.

Rupert said it was "unfair" that the current inequality is "destroying the middle classes" and noted that the new, precarious middle classes will no longer buy the luxury goods he peddles because they're worried about going broke.

He's got a point. Wealth inequality is destabilizing. It leads to the donor class taking charge of policy, trying out their daffy, incoherent ideas on the general population, destroying the media who criticize them, potentially at the cost of the world itself.

Surveillance makes it cheaper to separate sheep from goats and neutralize the opposition -- meaning that the deluded rich can make things that much worse before their day of reckoning, racking up a huge policy-debt that will come due for all of us.

“We cannot have 0.1 percent of 0.1 percent taking all the spoils,” said Rupert, who has a fortune worth $7.5 billion, according to data compiled by Bloomberg. “It’s unfair and it is not sustainable.”

“How is society going to cope with structural unemployment and the envy, hatred and the social warfare?” he said. “We are destroying the middle classes at this stage and it will affect us. It’s unfair. So that’s what keeps me awake at night...”

“We’re in for a huge change in society,” he said Monday. “Get used to it. And be prepared.”

Cartier boss with $7.5bn fortune says prospect of the poor rising up 'keeps him awake at night' [Adam Withnall/The Independent]