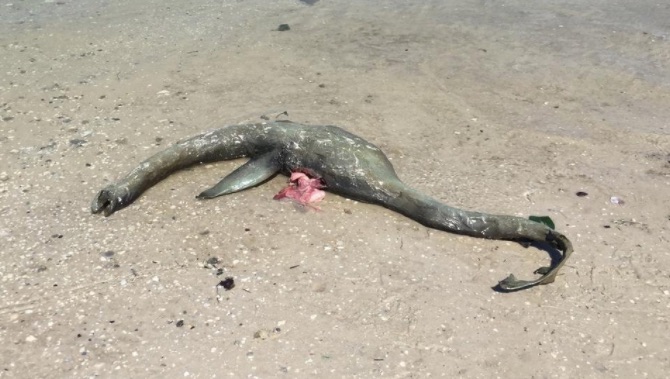 Over the weekend, Jeff Warren and his family spotted this mysterious sea monster washed up on the shore of the Wolf Island National Wildlife Refuge near Darien, Georgia. It is either:

• Altamaha-ha (aka Alty), a cryptid, said to live near the mouth of the Altamaha river, that reportedly looks very similar to what's in the photo

• A frilled shark, according to a marine science educator at the Tybee Island Marine Science Center

• A basking shark, in the opinion of a Savannah State University marine scientist

• Or a hoax, according to scientists at Georgia Southern University.

Either way, the story ends well.

“My son, who is twelve, thinks it is the child of the legendary Altamaha-ha and has now decided he wants to be a marine biologist,” Warren said.