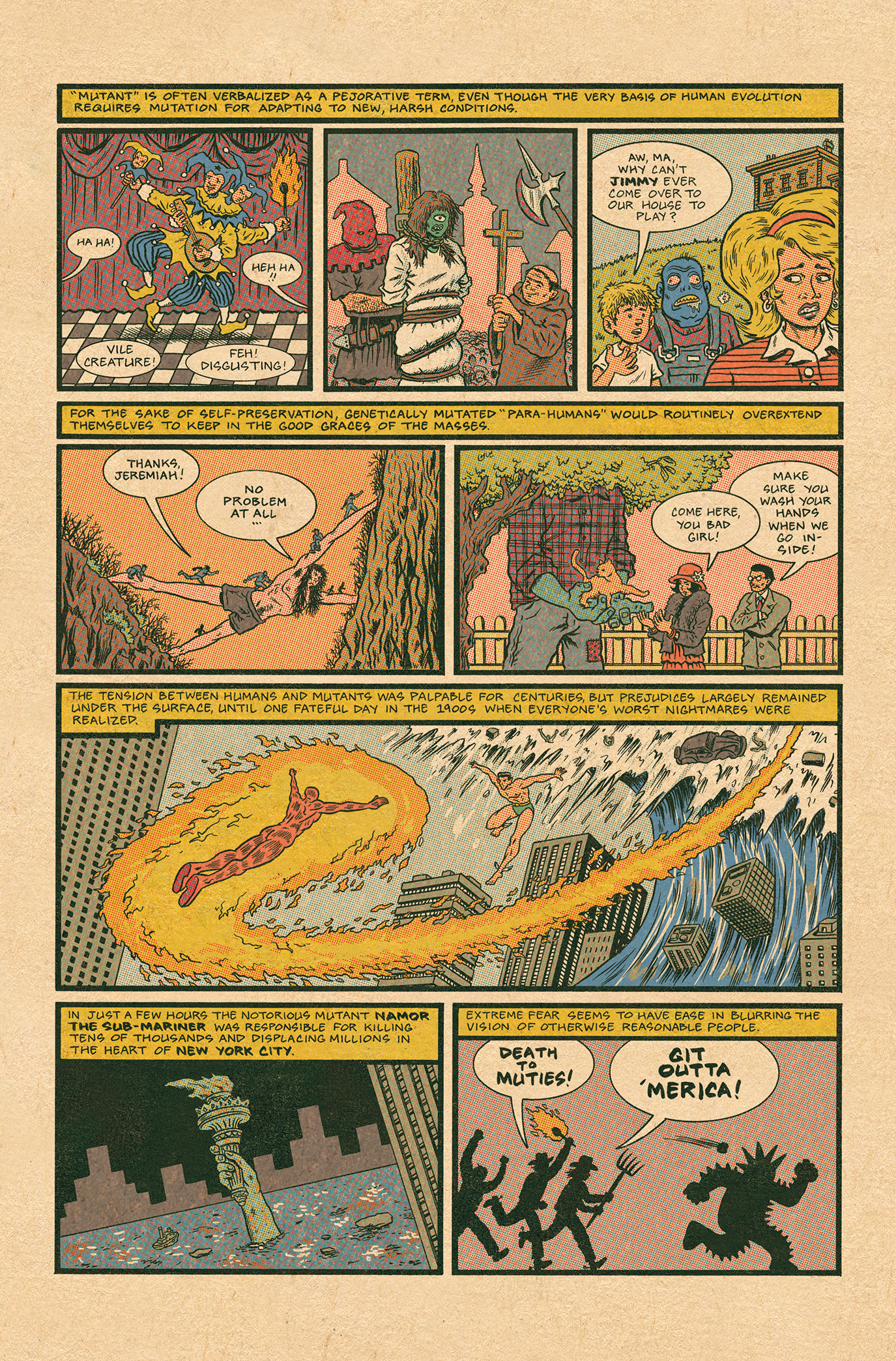 Welcome Ed Piskor back to Boing Boing (previously), where he'll be offering an annotated page-by-page look at the first part of X-Men: Grand Design, his epic retelling of how Marvel comics' pantheon of heroes came to be. Here's page 2; read page 1 first — Eds.

My goal with X-Men: Grand Design is to take the thousands of pages that make up Uncanny X-Men issues 1-281 and try to make a complete, concise, and satisfying 240 page story which includes all the most important elements, but none of the fat, redundancy, or deus ex machina from the series .

The X-Men and mutants, in general, are the quintessential marginalized underdogs of the Marvel Universe.I wanted to use this page to give readers the scoop on how mutants work in my version X-Men because it is slightly divorced from what's been established in the classic run.

The Marvel comics of the early ‘60s grew out of the Atlas comics of the ‘50s which were the product of a post-Hiroshima/Nagasaki ‘40s. The Atlas magazines used nuclear, atomic energy and mad-science as a McGuffin to explain the creation of many of their monsters. It’s no stretch to imagine these ideas seemed to factor into the X-Men origin. The two best-known X-Men writers, Stan Lee and, Chris Claremont suggest that mutants were the 20th century product of nuclear testing, fallout, etc. I like the idea that mutation has always been a part of our world. Where would evolution be without it?

Since mutants have always existed in my version of the X-Universe,I needed something more than simple physical aesthetics to act as a catalyst for the tremendous fear that “normal” humans have for them in our modern times. Something major was needed to get the hate-machine rolling or else why wouldn't mutants have been violently and strategically selected out of the gene pool thousands and thousands of years ago if the prejudice has always been aggressive and reactive? When Marvel decided that Namor, The Submariner was a Mutant it made sense that I could use the events in Human Torch #5 (1941) to create some major anti-mutant hysteria. Of course, in the conservative fashion of those old comics, all the people in NYC were able to evacuate before Namor’s tidal wave hit the city. That doesn't fly in my comic. Lots of casualties.

I think it’s a good idea to firmly root the X-Men into the wider Marvel Universe as much as possible because I never want you to forget that it's a magical place where almost anything can happen. It'll help ease you into the far-out intergalactic stuff that will come up in the future. If you can buy a single mutant sinking New York, then you can buy a Phoenix Force adorning the shell of Jean Grey, but that's getting ahead of myself. More on that later.