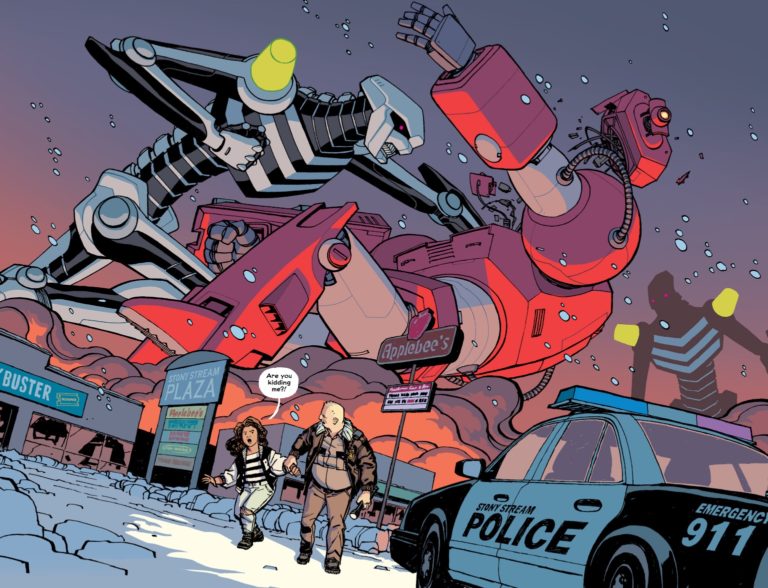 Paper Girls is the outstanding Stranger-Things-esque graphic novel series by Brian K Vaughan and Cliff Chiang, a tale of time-travel, meddling, war and coming of age whose mind-bending twists and turns earned it a Hugo nomination this year. Now Paper Girls 4 is on shelves, and it's time to party like it's 1999.

Set on New Year's Eve 1999, Paper Girls 4 has our plucky -- and embattled -- heroines racing through their hometown 16 years ahead of their own timeline, running into more versions of themselves, all the while dodging giant, killer robots that only a select few can perceive, as these behemoths smash the city around them.

On the way, Vaughan and Chiang unravel some of the mysteries of Paper Girls, the weird fights in whose crossfire the young women of this tale have been caught, a sense of which side we might want to root for (and also a sense that maybe neither side is on our side).

Vaughan is delivering the kind of adventure plot that kept Y: The Last Man moving at such a fantastic clip, tackling meaty questions about nonintervention, gender and the road not taken, and doing new things with time travel and graphic storytelling in collaboration with Chiang, whose character designs, action sequences, and use of space and panel-arrangement are beautifully handled.

These books are such a delight to read and so breezy and fun that you could easily devour all four in a sitting, and you should, because then you'd be ready for book five in a few months. This is a journey worth taking.