ICE agents remove legal foreign worker from farm, threaten farmer when questioned about having a warrant 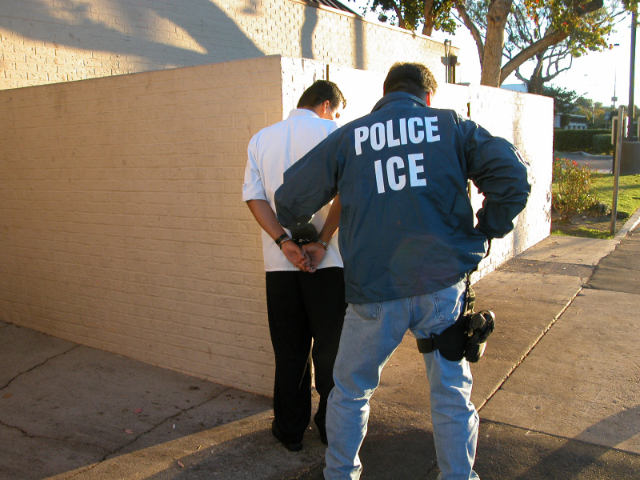 I don't want to alarm anyone, but it sounds like maybe some ICE agents are, I dunno, a shower of bastards.

According to Syracuse.com, New York state dairy farmer John Collins was doing his thing when he heard screaming. When he ran out to see what was happening, he found that his hired hand, Marcial de Leon Aguilar, was being pinned to the side of his farm's milk house by armed men. Aguilar is from Guatemala, and had all of the paperwork required to work in the United States. He'd been employed by Collins for just under a year.

When Collins confronted the armed men about what they were doing with his employee, they stated that they were ICE agents. As the goons slapped a set of handcuffs on Aguilar, Collins demanded to see the warrant that allowed ICE to come on to his property. You'll be shocked to know, I'm sure, that the agents stated that they had none.

It gets better. As the agents dragged Aguilar across the road to their waiting vehicle, Collins continued to demand that they produce paperwork on why they were taking his employee or show the authority that allowed them onto his land. As he did so, he began filming the exchange with his smartphone. Collins alleges that, at this point, one the agents grabbed the phone out of his hand, handcuffed him and threatened to arrest him for hindering a federal investigation. In the end, Collins was released, but Aguilar was carted away.

Oh, did I mention that Aguilar's kids saw the whole damn thing? Because they totally did – the Aguilar's family was living in a house on Collins' spread as a partial payment for his gig.

Aguilar's wife, Virginia, and the couple's four children were not in the U.S. until recently. She was caught crossing the border, illegally, with the children. Collins said she has been meeting with ICE officers since she arrived, and is seeking asylum for herself and the children because of the violence in Guatemala. Collins said Virginia met with ICE officers as recently as last week, and has another meeting scheduled for this Friday. At times, Aguilar has accompanied his wife, who is pregnant, to some of the meetings, Collins said.

So, instead of going through the proper channels to obtain a warrant, or nothing to go after individuals, per their mandate, that are actually in the country illegally, the two uniformed ass clowns opted to grab the first brown fella that they saw on the farm. Outstanding work. So what's the lesson here? Don't attend meetings surrounding the asylum process? Warrants and the rule of law don't matter under the current administration? Jackboots are a state of mind? I dunno.

Apparently ICE will be looking into the incident. I bet they'll send a real crackerjack investigator to hunt down the truth on this one.

Samaritan’s Purse is the Evangelical humanitarian aid organization behind the emergency pop-up coronavirus hospital that’s set up shop in Central Park to help with overflow from other health facilities, specifically New York’s Mount Sinai. In addition to the 14 tent, 68-bed field hospital in New York, the group also dispatched 60 disaster response specialists with […]