What do blind people "see" on LSD? 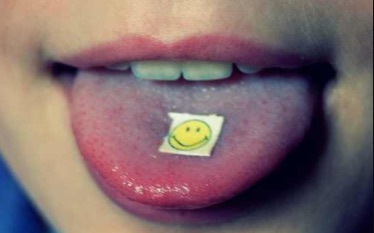 In a case study published in the journal Cognition and Consciousness, a 70-year-old musician who has been blind since birth reports on his experiences taking LSD. The man used the name "Mr. Blue Pentagon," a reference to his preferred brand of blotter. From Live Science:

"I never had any visual images come to me. I can't see or imagine what light or dark might look like," Mr. Blue Pentagon told the researchers. But under the influence of LSD (lysergic acid diethylamide, also known as acid), sounds felt unique and listening to music felt like being immersed in a waterfall, he said. "The music of Bach's third Brandenburg concerto brought on the waterfall effect. I could hear violins playing in my soul and found myself having a one hour long monologue using different tones of voices ... LSD gave everything 'height.' The sounds coming from songs I would normally listen to became three dimensional, deep and delayed."

Mr. Blue Pentagon's account is a rare glimpse into how LSD may feel in the absence of vision. Beyond a few Q&A threads on Reddit, the only other resource is a 1963 study of 24 blind people, which was actually conducted by an ophthalmologist to test whether a functioning retina (the part of the eye that senses light) is enough for visual hallucinations (it's not), and didn’t include the participants’ psychological experiences beyond vision.

Understanding Mr. Blue Pentagon's experience with the drug may give unique insights about how novel synesthetic experiences through multiple senses are concocted by the brain — especially a brain that is wired differently due to lack of vision, according to the researchers from the University of Bath in the U.K. who published the report.