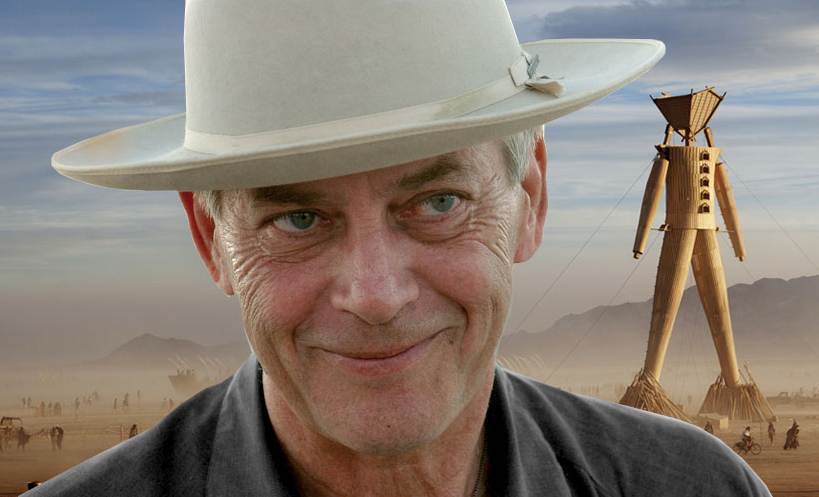 A few weeks ago, Burning Man founder Larry Harvey suffered a massive stroke. Today I have learned that he has passed. He was 70 years old.

Our founder, friend, and original instigator, Larry Harvey has passed away. Larry suffered a massive stroke at his home on the morning of April 4. We resolutely held out for a miracle. If there was anyone tenacious, strong-willed and stubborn enough to come back from this challenge, it was Larry. Though we all hoped he would recover, he passed peacefully this morning at 8:24am in San Francisco, with members of his family at his side...

Read Marian's announcement in its entirety here: The Man in the Hat, Larry Harvey, Passes

Larry's friend of some 25 years and a director of the Project, Stuart Mangrum, penned a tribute that detailed Harvey's life:

...As a denizen of San Francisco in the 1980s, Larry found himself drawn to the sorts of Bohemian scenes that are often the breeding grounds for serendipitous collaborations. And when he started hosting his own happenings on Baker Beach, he lit a flame that in turn drew these free spirits to him. He joined forces with the San Francisco Cacophony Society, and its members became some of the first Burners. When San Francisco authorities shut down the Baker Beach Burn in 1990, it was these Cacophonist colleagues who helped orchestrate the event’s relocation to Nevada’s Black Rock Desert.

Over the next three decades, Harvey fought tirelessly to keep the event going, through dark days of organizational strife, government opposition, and financial uncertainty, as well as through boom times of community growth and unbridled creativity. Through it all he pursued his vision with a single-minded determination. In the words of his contemporary Stewart Brand, he created something that has “surpassed in every way” all other offspring of the San Francisco counterculture. Burning Man is now a global, year-round community, with 85 official regional events on six continents, and hundreds of thousands of passionate participants...

The Project offers these ways to share memories and offer financial gifts in his memory:

In lieu of flowers, you are invited to share memories of Larry at larry.burningman.org. We’ve also received inquiries about financial gifts. At the request of friends of Burning Man, Burning Man Project has established the Larry Harvey Art and Philosophy Fund to support art projects, philosophical endeavors, and other work that reflects Larry’s passion for the playful and the profound. Please see donate.burningman.org/art-and-philosophy-fund/ for more information.

In addition, his brother Stewart Harvey has created a photo essay in his honor.

I'm still in shock but I'd like to share this: This is my community and I'm truly saddened by the news. I fell into Burning Man in 1995, shortly after arriving to California, and was soon pulled into the greater shenanigans of the San Francisco Cacophony Society a month later. That was when I was reborn as "Rusty Blazenhoff" (I arrived to the Bay Area with a birth name). I have Larry and all the early playa pioneers to thank for giving me a space to be me. Without Burning Man, I feel certain that I would not be the "professional free spirit" I am today, and that includes being a blogger for Boing Boing. So, thank you, Larry. You are missed already.

As my longtime friend Juke, who I met through the Burning Man community oh-so-many years ago, writes, "We're gonna need a bigger temple..."