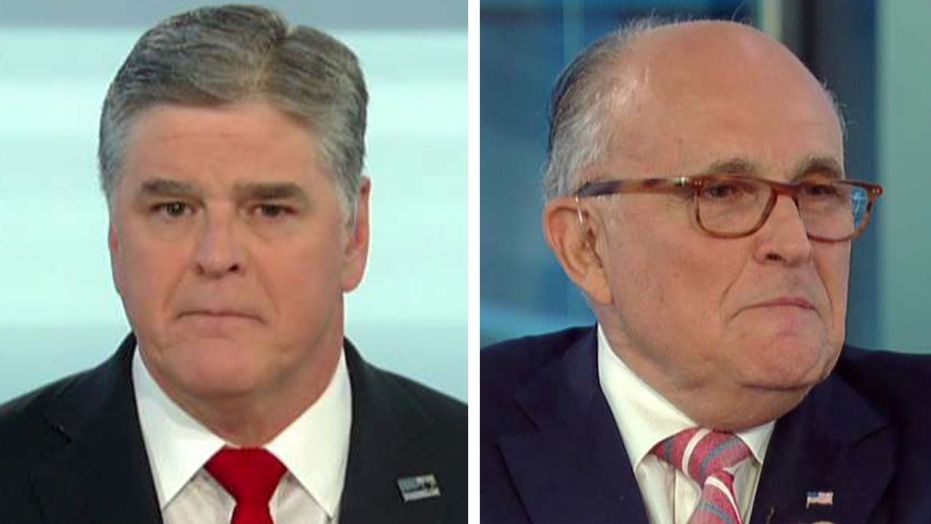 Sean Hannity sounds shocked, as you can hear for yourself in this video clip--he says “I didn't know that” when Giuliani reveals that Donald Trump reimbursed Michael Cohen for the $130,000 paid to silence Stormy Daniels.

You know what's so crazy? Giuliani wasn't even asked. He just blurted it all out.


Giuliani said the money was “funnelled through a law firm.”

He also called James Comey a pathological liar, a “perverted man” and talks about why the President fired Comey.

They were smiling before the interview. Are they still smiling now? pic.twitter.com/c2oWL0OYRb

Speaking on MSNBC as the words broke, 'round the internet, Stormy Daniels' lawyer Michael Avenatti said he was “speechless.”

“The President of the United States should not be lying to people about this,” said Avenatti.

“There may be campaign finance issues, money laundering, bank fraud. This is a very serious matter that deserves the attention of the American people.”

No need for Cohen to flip, Giuliani just did

YOU HAD ONE JOB. In his first tv spot as Trump’s lawyer, #RudyGiuliani, with arms defensively folded on Sean Hannity's Fox News show, revealed a bank reporting violation that may be a federal crime. https://t.co/2QHs0Cn9Nt

Boom. Giuliani just told Hannity that Trump paid Cohen back the 130k for the Stormy agreement.

Trump “reimbursed” Cohen for the Stormy payment “over a period of several months,” per Giuliani. Insists the payments were “perfectly legal.”

"he didn't know the specifics of it, he knew the general arrangement."

Giuliani just referred to federal law enforcement agents from the district where he used to be US attorney as “stormtroopers.” What a despicable human being he is.

Giuliani is working *for* the President, right? Did I miss an episode? https://t.co/NuUmtf8nir

Avenatti tells @TheLastWord he hopes Giuliani is not suggesting the Cohen reimbursement took place over several months to avoid $10K+ payments to avoid reporting those payments: “That’s a serious, serious problem. It’s a violation of federal law. It’s a criminal act to do that.”

“They better have an explanation for that. That’s a problem.” - Laura Ingraham on the inconsistency on Stormy Daniels payment

Rudy also says *he* “takes care of stuff” like this for his clients all the time. Must be great clients. https://t.co/Zv8AtXBXp0

The Mueller Questions Map Out Cultivation, a Quid Pro Quo, and a Cover-Up (Part One, Cultivation)https://t.co/KYJMwJswMH

The Quid Pro Quo: a Putin Meeting and Election Assistance, in Exchange for Sanctions Relief (Part Two in a Series)https://t.co/iugbTm8gsG

I wonder what color tuxedo Sean Hannity will wear to the ceremony when he is awarded a Pulitzer next year for getting the president’s personal lawyer to accidentally reveal (if true) a huge falsehood from the president.

Could it be — and I’m just spitballing here — that they lie about literally everything?

did Trump give the ok for him to go on Hannity? did the WH strategic comms folks weigh in? or were they too busy going to WHCD parties and sitting to dinner for nytimes profiles... like, where are the parameters? it's amazing to me how they keep giving the story legs. https://t.co/omiaFBYt1t

Trump got his cover up on layaway. https://t.co/mOmCMdk8WI

This Rudy self-destruction on live TV reinforces one of my oldest truisms about politics: It's not the tough interviewers that get you in trouble; it's when you are with the friendlies (Sean Softballs here) that you screw up because you feel too comfortable.

I think we may have all misunderstood what Giuliani meant when he said he was going to "wrap up the Mueller investigation in a few weeks." https://t.co/Fv6wseKdUy