A search engine for old Geocities sites -- find yours, and you can start re-editing it 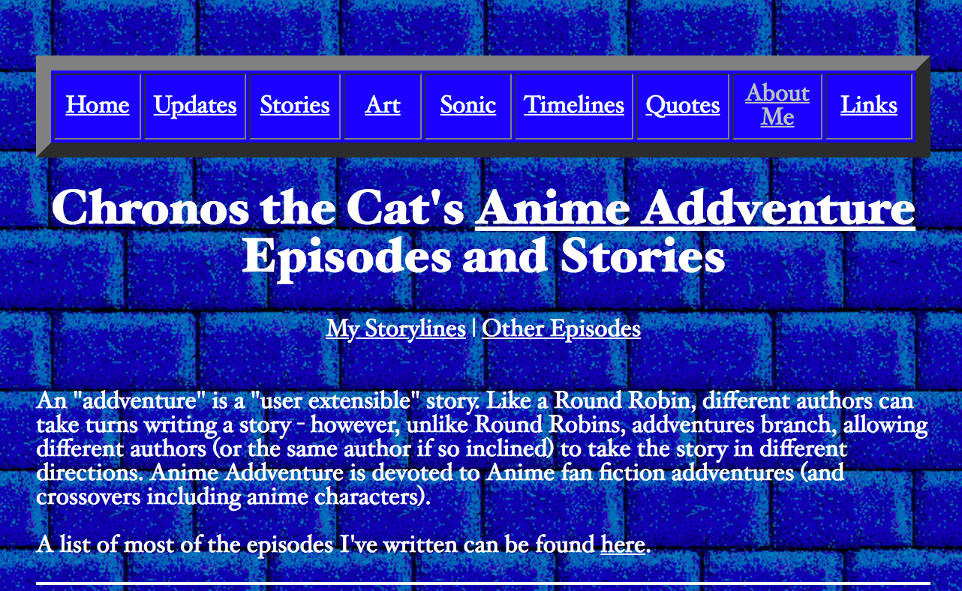 So, Geocities -- the service that, back in 1994, set off the first phase of everyday folks putting crazy, fun stuff online -- still exists as a hosting service. Better yet, it has also preserved an awful lot of those old Geocities sites, and has a rudimentary search engine to find them.

I searched for "anime" (what else, really?) and immediately found a zillion fanfic sites, like the one above.

When I posted about this search engine on Twitter, a lot of thirtysomething web developers immediately headed over to discover: Holy moses, the fansites they'd made when they were tweens were still up and running!

Bonus: if you find a site you created way back when, Geocities has a process for reclaiming yours. So you can start re-updating a site that you probably last edited when Bill Clinton was president.

I’ve written before here about the move to get the World Wide Web consortium (W3C) to cram digital rights management (DRM) into the next version of HTML, called HTML5. This week, EFF filed a formal objection with the group, setting out some of the risks to the open Web from standardizing DRM in the Web’s […]

Regular readers will know that there’s a hard press to put DRM in the next version of HTML, which is being standardized at the World Wide Web Consortium (WC3), and that this has really grave potential consequences for the open Web that the WC3 has historically fought to build. The Electronic Frontier Foundation has joined […]

AUSTIN—The knight who invented the World Wide Web came to SXSW to point out a few ways in which we’re still doing it wrong. Tim Berners-Lee’s “Open Web Platform: Hopes & Fears” keynote hopscotched from the past of the Web to its present and future, with some of the same hectic confusion that his invention […]